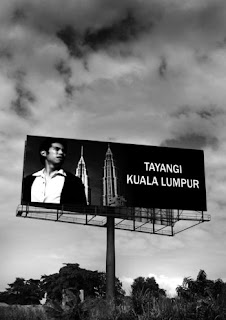 A screening in conjunction with "Processing The City" exhibition
by Valentine Willie Fine Art and The Annexe, Central Market

28 Hours Later by Ng Ken Kin
Low-budget Malaysian DV meets big-budget British DV in this cheeky intertextual ride. A party-goer wakes up after a night of disco fun, only to find himself alone in the city. (14min)

18? by Danny Lim
Who's spraying the number 18 around the city? What are they trying to say? Are Malaysians running out of spaces to express themselves? (18min)

Feature
Ciplak by Kharil M Bahar (83min)
A Malaysian student in UK makes extra cash by smuggling pirated Hollywood films back to England. Unfortunately, the day he's supposed to deliver his supply happens to be the day of the biggest raid in the city.

Welcome to Kuala Lumpur by Eleanor Low
The city speaks. But is anyone listening? (3min)

Al-Baqarah by Saiful Razman
Enigmatic urban odyssey where people literally never say what they seem to. Named after a part of the Quran. (7min)

Majidee by Azharr Rudin
Two strangers at Puduraya struck up a conversation while walking to Klang Bus Station. What do you know – they are from the same hometown! (15 min)

Feature
The Big Durian by Amir Muhammad
In 1987, a soldier ran amok with an M16 in Chow Kit. It triggered rumours of racial riots. Suddenly, over 100 political dissenters were arrested under the Internal Security Act. The film speaks to real and fictional Malaysians to uncover the facts and myths surrounding this event. (75min)

Detour by Jassim Alsaady
How safe is KL for backpackers? No, not from snatch-thiefs, but from weirdos. (27min)

A Day in the Life of by Syed Omar
A perfectionist civil servant in a "jabatan khas" escapes his reality only in his dreams. (10min)

Feature
Bukak Api by Osman Ali
A classic! A safe sex educational video turns into a drama about the trials and tribulations of the sex workers in Chow Kit. (80min)

Don't forget, we also have a FREE talk:

The Dogma of Economics
by Kevin Mark Low (designer, writer)

Email ThisBlogThis!Share to TwitterShare to FacebookShare to Pinterest
Labels: EVENTS

I was at the screening of The Big Durian yesterday evening, and bought a copy of the DVD as I need to watch it again.

The shop where my family had a Chinese medicine shop near Chow Kit was shown in passing in the film. At the time you filmed The Big Durian, we had sold the shop, but in 1987, my parents were still living on the top floor of the shop and running the family business on the ground floor. They were there on the night of the '87 event, and we were all there (me included) on the night of May 13.

Thank you for making the film.