A history of amnesia 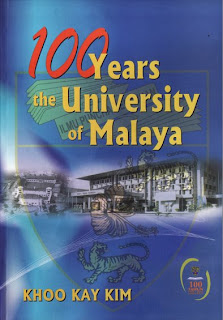 Although not advertised as a three-hanky weepie, this book will make you weep. It’s not just the distressingly ugly cover. It’s not even that the spelling veers erratically from American to British – although you’d think that the proofreaders at University of Malaya Press would know the difference between the two.

No, the root cause of your weepiness is hinted at in a quote that’s still in the pre-Independence era, when a mat salleh was the university’s Vice-Chancellor. This was his rationale for allowing politics on campus: “If you can’t hammer out your ideas on politics … in a university, where can you?” he asked.

Fast forward two decades, and what do we get? The independent government introduced legislation that banned political activities in universities! This and related constraints effectively neutered student activism and even independent academia.

The 1960s and early 1970s were a particularly dramatic time for UM activists. There were protests against the visiting Thai Prime Minister (on the welfare of Patani), the Japanese Prime Minister (for the country’s newly resurgent economic imperialism) and the US embassy (for that country’s role in the Israeli-Palestinian conflict). The highlight: demos in support of the rubber smallholders of Baling in 1974.

Students then were so radical that a student organisation temporarily seized control of the UM campus! It’s hard for us to imagine such well-organised chutzpah.

But imagine it we must, since this book neglects the episode entirely. The prominent names at that time – Anwar Ibrahim, Hishamuddin Rais, Kamarazaman Yaakob – are absent. But a chapter tantalisingly titled “Transformation and the Seventies” does, however, contain a 5-page report on “The Importance of Sports.” Gee, thanks.

Although the author does mention, en passant, the Universities and University Colleges Act, we don’t get a sense of the controversy surrounding it. Similarly, when Dewan Tunku Canselor burned down in 2001, he does not mention that it stayed news for some time because pro-reformasi students were wrongly accused of torching it, on the eve of a visit by the Prime Minister. We instead get a feel-good paragraph about how “graduates and members of the public responded generously to appeals for funds to repair the Hall.”

Many other dramatic episodes are missing. Yes, I know this isn’t supposed to be UM Babylon or a campus edition of Melodi, but the gaps are too numerous to ignore. The book has the feel of a corporate prospectus seen through the ‘politically correct’ (though not in the American sense) blinkers of the present-day Establishment.

The author and publisher might claim lack of space. True, 171 pages for a century is pretty skimpy. Why, then, do we get a glowing three-paragraph CV of the “extremely versatile” Vice-Chancellor who was at UM when the book came out? Surely someone like Ungku Aziz or Syed Hussein Alatas deserves more of that precious space. Can you even remember who the V-C was in 2005? Thought not.

Despite our frustrations, there are still glimmers of what the book could have been. The prejudice against local medical graduates in the colonial era is nicely sketched. We also get a sense of how the university was forced to expand too quickly to answer the demands of a new nation, and the pressures of, in the initial years, maintaining campuses in both Kuala Lumpur and Singapore.

But even then, there are gaps: We hunger to know more about the split between UM and what is now known as the National University of Singapore; we are specifically interested, of course, in why the latter is doing so much better.

The last chapter is called “A World Class University”, so we know that standards are important. But wait a minute! UM has “from time to time” been “called upon to do ‘national service’ [and thus] could not entirely focus on achieving an increasingly higher international standing.” This seems more like apologist PR than an objective evaluation of UM’s slipping standards.

The ‘national service’ is a reference to the post-1969 social engineering that demanded more places for Malays in education. UM previously had a relatively non-racial image, but the graduates now look like the target audience for Akademi Fantasia. We have yet to see how this academic fantasia makes for a “world class university.”

UM is not just the nation’s oldest university, but the only one that has a Department of History. (Isn’t that sad?) The author himself is synonymous with the study of history, which is why I expected more from this book. It’s not like it was written by some anonymous hack in the PR office. History should be made of sterner stuff.

Sad indeed, maybe you should try at writing the true history of UM? God knows the esteemed university deserves a writer of your caliber.

Or is someone else up for the challenge?

Amir - this is Malaysia, just what did you expect?

Jelonbelon:
I think Hishamuddin Rais would be ideal to write it. For more about UM student activism, go here.

Yusof:
I continue to be optimistic!

"No amount is too small, and will be gratefully received."

Anyway, how the books you review got selected. Do you pick them yourself or the newspaper do?

Anyway, how the books you review got selected. Do you pick them yourself or the newspaper do?

aisayman, so obvious lah. Nice to hantam then select lor.

I pick and, most of the time, pay for them myself. Out of the 34 books so far, only about 5 were complimentary 'review copies.'

Then, this is probably the worst pick of all time. I do feel like the whole book not worth reviewing at all. But thanks for the link.

What Mise's comments suppose to mean? Really dont get it.

Malaysian Gods? Please tell me you deleted the post just now because you gonna reschedule it.

I deleted it because I am making some changes to the poster.

You are NOT supposed to blow my cover!!!

Amir, you say re the split between UM and what is now known as the National University of Singapore, "we are specifically interested, of course, in why the latter is doing so much better."

Don't you think the book itself makes the question "why?" redundant?