You gotta have faith 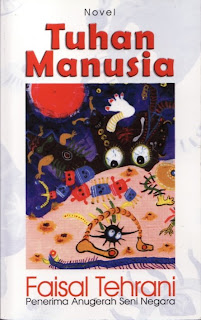 Last week’s book, Ayat-Ayat Cinta, was a love story with a very consciously contrived Islamic setting. This week’s book also exists in an Islamic epistemological universe, but is more daring and austere in form and content.

Tuhan Manusia is a provocative and sometimes fascinating work. It’s also thematically very conservative, but since when were conservatives not allowed to be provocative?

The 17-year old protagonist, Ali Taqi, is stunned that his older brother Talha is now murtad (an apostate). The whole nation seems to know about it (the novel was written shortly after the Lina Joy case) and Ali Taqi is enraged. He keeps remembering the wise words of his late mother, who said that religion is the tiang seri (most important pillar) in one’s house. These words constitute the opening paragraph of every single chapter, achieving an incantatory quality. So what Talha did was to bring down the house – but not in the way a standup comedian would.

Ali Taqi is determined to do battle against the forces of liberalism and pluralism that he blames for his brother’s decision. The battle isn’t a militaristic one, but social and intellectual. Most of the book takes the form of dialogues between himself and various ustaz, professors and wise people. There’s also a debate on stage, and a lecture and Q & A session with himself (now a grownup) near the end.

Tuhan Manusia is extremely talky; you can imagine it functioning as an unusually arid radio-play. Flip open a random page: someone is quoting a Quranic verse, a saying of the Prophet or his companions, or otherwise puncturing holes in the very idea of religious pluralism. Various texts, some quite esoteric, of the Islamic and Western intellectual traditions are excavated and explicated.

No wonder Ali Taqi doesn’t have time for a girlfriend! But there is a schoolmate, Zehra, who fancies him. Zehra’s father Aris is a liberal pluralist intellectual (although the novel doesn’t deign to accord him a PhD, unlike those other guys who agree with Ali Taqi’s conservatism). Aris is part of a conspiracy to weaken the faith of Muslims, which explains why he keeps getting grants from Germany and the US.

Talha the apostate never appears and is never permitted to speak, even in flashback. Conceptually, he has been cast out of the fold, waiting for divine wrath to deal with him. (Perhaps, one day, someone can write Talha’s story!)

Most of the novel takes place in a very homosocial environment (with lots of manly hugs) but women are nonetheless revered by always getting the first paragraph, and they are the only ones to speak on the last page.

The speech is never realistic. Faisal Tehrani thinks that realism, with its seemingly passive gaze at human foibles, is un-Islamic. The thoroughly didactic tone of Tuhan Manusia is his attempt to return to what he sees as the pedagogical origins of Malay-Muslim literature. Ali Taqi’s father spells it out (just as everyone in this book spells things out): “Cerita yang tidak tepu nasihat dan ilmu ialah cerita yang sia-sia.”

In this world-view, there are only two groups of people: those who are ‘for’ or ‘against’ Islam. These include entire systems such as Marxism, feminism and liberalism. When Aris is given a chance to defend his views on stage, the novel makes him babble and then trail off. Well, at least he is not caricaturised further; a cruder work would not hesitate to impute all manner of vices to him.

But there’s certainly a difference between believing “all religions are the same” (which is what this novel calls pluralism), and believing that all religions contain essential truths. Such as this saying (not quoted here) from Jewish tradition: “How can you love God if you can’t even love human beings?”

Tuhan Manusia does push some unexpected buttons. Ali Taqi’s observation of how the Saudi government disrespects the Prophet’s legacy is hardly in keeping with what a 17-year old on his first umrah would think. It’s Faisal’s essayistic voice, but it does hint at how ‘Islam’ is hardly a static entity but always operates in the profane realm of politics.

In his final speech, the adult Ali Taqi warns against hypocrites in Muslim society. But if Talha had not left the religion, wouldn’t he qualify as one? By making that difficult choice (which caused him to be disowned), he was at least being true to himself. Although frequently presented as being under threat, Islam is still the fastest-growing religion in the world, so wouldn’t it be better to have fewer of these munafik?

Ah, but in the Tuhan Manusia scheme of things, what I just wrote might seem dangerously ‘liberal’ or even ‘pluralist.’ In the interest of saving myself from fatal freak accidents (I shan’t be more specific), I recommend that you read it for yourself. I didn’t feel like hugging it, however manfully, but its righteous energy and erudition did earn my respect. And it didn’t commit the ultimate ‘sin’ of fiction: it was never boring.

wow! u make me want to read it!

So surprised this was not banned.

Yes, I do recommend people read it. Next week's column will be on another FT book :-)

Hi, I know this is out of the blue, but I was wondering whether you would be interested in doing a talk on "Ganas, Seram dan Seks: Sejauh Mana Batas Keterlaluan dalam Filem Tempatan?" for UiTM Mass Comm's 60th Colloquium on the 28th of March? Since you directed Susuk, it would be much appreciated to get your view on this matter. I do want to invite you formally but I can't seem to find your contact number anywhere. I'll let you know in detail if you're interested. Thank you so much!:)

I am in Mexico, so for God's sake don't call me! Email me instead at matahari.books at gmail dot com.