Look back and lepak 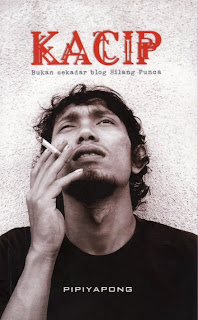 Speaking of Salleh Ben Joned’s poetry, Lat said it was like “meeting Hang Jebat on his day off.” Reading this blook (a neologism that combines blog and book) feels like meting Lat’s enduring creation Mat Som.

Unlike the archetypal rebel-hero of Malay antiquity, Mat Som is already so lepak (chill) that he doesn’t need a day off. And so it is with Pipiyapong, who is the nom de blog of one Firdaus Abdillah, twentysomething.

I don’t know him personally so cannot attest how many of the entries are strictly factual and how many fanciful. Surely, the one about rescuing Siti Nurhaliza on the day of her akad nikah can be safely categoried in the dreamy Mat Jenin category. But did he really hold down so many blue-collar jobs, usually in repair shops, that lasted no more than a couple of months?

Kuala Lipis is mentioned often enough for us to assume that he is indeed that town’s most famous export after the aforementioned chanteuse. A particularly funny chapter here describes his boyhood anticipation whenever the family would visit Kuala Lumpur; one of the main spoils would be the thrill of taking out his new pensil picit and telling pals where he’d bought it. It’s enough to make up for the sick-bag that needs to be brought along for the winding road journey.

This thoroughly charming book is in the vernacular Malay that you won’t get in Dewan Bahasa publications. Take the image of the makcik exiting a post office while announcing (perhaps smugly) that she’d just paid her Astro bill. The response of the writer (who is currently indignant at the slow collection of letters: he’d just posted a job application) thinks: “Hek eleh…kecoh. Orang lain ada juga tapi rileks saja.”

The various anecdotes start from the small-town kutu rockers’ era of the 1980s right to the present, with all those hapless jobs in between. As the cover makes plain, there’s also plenty of smoking, because what’s the point of mengaji (which means, in this context, not studying the Quran but – ba doom dush! –hanging out at a warung cendol known as Aji) without nicotine?

I particularly loved the way in which idioms that have permeated popular consciousness get themselves all twisted. To pick just one example: “azan sudah berkumandang menandakan Doraemon dah nak start.” The tone is never strident, but such sweet bathos is often used to puncture pomposity.

Aside from blog entries, this also reproduces a short story that is written in a lightly parodic ‘proper’ young-adult literature style, replete with complete sentences like: “Aku ada satu rancangan!” And also an interview with himself where he comes across as even more sweet and laidback.

In his blokey, self-deprecating style, he is our very own Nick Hornby. Lightly fragmented though it is (after all, it’s a compilation rather than a book book) Kacip gave me the same thrill as reading Fever Pitch when it came out –even though, unlike the two writers, I don’t give a toss about football.

Kacip (it’s a slang word that’s similar to ngam: when things go together nicely) is a limited-edition book that is not sold at shops. It is the strategy of Sindiket Sol-Jah, the collective that published it, to ensure a certain cult status. Is this some kind of anti-capitalist agenda? More likely, it’s a cheeky acknowledgement that being modest actually makes a person more interesting. Just like the way the young Siti Nurhaliza would always seem shocked whenever she won one of her numerous awards –- which was before she wanted horse-drawn carriages for her wedding.

Hey.. check out puisi-collabo ere! Nu pramoedya in your face styleez
*click
Lwts see if u can handle it more than kacip, ahhahaa