It all started when I bought this charming box-set last month: 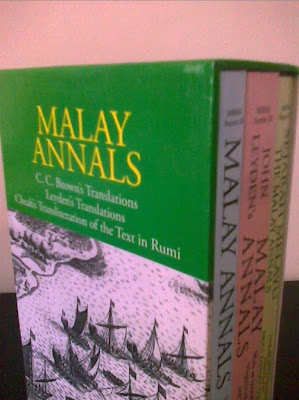 I had read Sejarah Melayu (The Malay Annals) back in secondary school, but I'd forgotten much of it, except for odd things like the repeated use of the phrase "ratna mutu manikam".


So getting the box-set was an incentive to read it again, proper-proper. This collection by MBRAS actually contains the oldest surviving text of Sulalat us-Salatin (The Genealogy of Sultans) -- which would be better known, centuries later, as Sejarah Melayu. (There are 32 Jawi manuscripts in all, 29 of them outside Malaysia, and they vary.) It dates back to 1612 and was written (or 'written') by Tun Bambang for the Johor court.


Since I was going to read the thing anyway, I thought it would be fun to record my impressions. So I would write something after each chapter. Ladies and germs, I now bring to you Sejarah Melayu Reloaded.*


Chapter 1 is already up! I hope to sustain this daily and end on 16 September. Sempena Hari Malaysia gitu.

* I am grateful to Reza Rosli for helping out with web matters!
Posted by Amir Muhammad at 13:55

Look very good project. I remember reading sulalat-us-salatin a few time.. what to must read bcos it text for my kesusasteraan melayu paper for STP exam 1974. A lots of discussion about the book...

I still remember a bit here and there ... not like you i dont have the opportunity to read the original transcript but i do read the jawi version some where... microfilm if i am not mistaken

However i like your projrct to reload it... i hope you also rewrite the malay version... if you feel you wanna somebody to discuss with please communicate, Thanks anyway

hi there...can i know where 2 get this book?