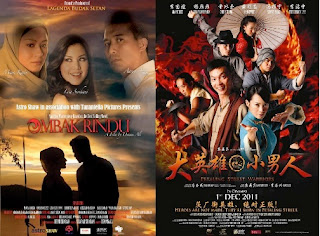 First off: I enjoyed both Ombak Rindu and Petaling Street Warriors. And they come from different strands of Malaysian cinema.

Ombak Rindu (although it's based on a romantic potboiler novel) reminded me most of the films written by Hamzah Hussin and directed by M. Amin: Rumah Itu Dunia Aku (1963), Dosa Wanita (1967) and Sial Wanita (1969). In all of these, a virtuously suffering young heroine has terrible things done to her by Fate (in general) and a Scheming Older Bitch (in particular). The fact that the heroine is willing to endure torment for most of the movie's running time is meant to make us not only admire her fortitude but appreciate the cathartic ending even more. Thus, Ombak Rindu is a perverse paean to female masochism.

(Malay women love movies in which women get emotionally abused. Malay men don't notice, as they're too busy watching TV wrestling shows in which men get physically abused.)

There's a car-chase sequence in Ombak Rindu that recalls the end of Madu 3, but I couldn't help noticing how much freer the kebaya-wearing women in the 1964 movie were compared to the Western-garbed or tudung-clad ones in 2011. Have superficial Westernisation and Islamisation (both of which are imported values; our ancestors were neither mat salleh nor Arabs) had such a diminishing impact?


In contrast to the sentimental solipsism of Ombak Rindu is Petaling Street Warriors, which affirms that Malaysian cinema in the Chinese language is much more interested to talk about 'Malaysia' than our Malay-language cinema is.

Although a kinetic fight sequence at the end becomes a catalogue of Chinese pop cinema (such as 黃飛鴻 and 李小龍), Petaling Street Warriors actually reminded me of the robust iconoclasm of Ali Baba Bujang Lapok. Even before the cameo by 孫文 / 孫逸仙, the movie was effortlessly political as it flipped about notions of citizenship and governance. There are even 'illegal' gatherings, and therefore terribly topical.

It's not as frisky and knockabout as Nasi Lemak 2.0 (the movie it would most likely be compared to), but it shows that a mish-mash of pop genres, when handled with wit and verve, can be utterly zany and utterly serious at the same time.


The closing scenes of both movies are significant. Ombak Rindu offers a bumigeois fantasy on a yacht (where I am sure the champagne is halal). The end of Petaling Street Warriors is in the spirit of democratic optimism: it's only when we give up inherited privileges that we can truly live (together).

I am glad I saw these two movies as a double-bill, in the spirit of 1Malaysia or 2Malaysia or oh well whatever nevermind.
Posted by Amir Muhammad at 13:42

Most people that I met said that they cried when watching Ombak Rindu, while I found the movie a bit funny. Maybe because I read that novel before, so it's not what I expected.

In the other hand, I still didn't watch Petaling Street Warriors, but I do hope it'll be as good as Nasi Lemak 2.0.

It was the first time ever I watched Lisa Surihani in action, and she has the potential to become a scheming older bitch one day, more miserable than Joan Collins.

Are you really saying you enjoyed Ombak Rindo as much as you did Petaling Street Warriors?

Where did I say that?

malay cinema is stuck in an unholy time wrap, islamization or not.

Lol. To be fair though, I read a lot of shoujo manga (Japanese comics catered for girls) and a lot of emotional abuse/blackmail happens to the female characters in those as well. Maybe it's an Asian female thing? Hmm.