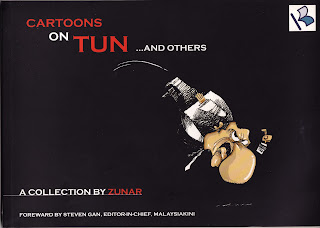 The book we discussed last week, Paradoxes of Mahathirism: An Intellectual Biography of Mahathir Mohamad, was nuanced and scholarly. It contained quite a few 50-sen words.

The book for today is NOT nuanced or scholarly. It is not published by Oxford University Press but rather the publishing arm of Malaysiakini. And it does not contain many words at all, since it’s a collection of cartoons.

Zunar’s work has come out in Malaysiakini, Harakah and Suara Keadilan. This book zeroes in on its target with no mercy. As he says in the one-page intro: “Why pinch when you can punch?”

This book is sly, sardonic, sarcastic, and probably a few other words that start with ‘s’. Certainly there are silly moments too, but the silliness is inspired lunacy. Check out the spoof movie posters: Pirates of the Carri’BN’. Nightmare on M Street. Lord of the Ringgit.

You get the picture – ah, but you need to see the pictures to get it. He can achieve with a few deft strokes of the brush what many others can’t pinpoint with a throbbing desktop and a fat Roget’s.

One of my favourites is right on page 3: A three-step morph of the UMNO logo to become Dr. Mahathir’s smugly triumphant visage. No words required. Save a sympathetic thought for all the poor (but well—meaning!) scribes who had perspired while typing out words like “concentration of power”, “hegemony” and even (God help us) “hierarchic!”

Words, too, can morph: “Proton” becomes “pro-Tun”. “Saya anti rasuah”(I am anti-corruption) changes its meaning entirely with the addition of a single strategic ‘n’ – go on, try it.

The book might be compared to Lat’s Dr Who? which was also a compilation focused on the same person. Lat covered a longer span of Dr. Mahathir’s career so naturally had a more panoramic view. Since Lat was published in a more Establishment paper, his portrait was also far more affectionate.

Be that as it may, there still is a soupçon of affection in Zunar’s pungent brew. Perhaps it’s the grudging admiration for a man who seemed to have so much energy. Rather telling is the three-panel job on page 56, where three different people beg Dr. Mahathir not to resign. The third is Zunar himself, who cries, “Whose nose am I going to draw?”

Caricature needs exaggeration, but the way Mahathir’s bulbous snout is unduly emphasised has drawn some criticism from liberals who see it as making fun of his ‘non-Malay’ features. You can also say that, by equating Mahathir at various times with Hitler, Bush, Castro and Zionism, Zunar runs the risk of ideological incoherence.

Luckily for Zunar, his talent matches his bile. This is propaganda that is often artful. If you think this is an easy task, then try explaining why the Senyum Kambing front-page cartons of Utusan Malaysia have never, ever been funny.

The ‘others’ of the title inevitably encapsulates the current Prime Minister. The scalpel is still used, but feels blunter, because no one else has come close to Mahathir’s polarising (and therefore galvanising) persona. For starters, even without looking at the cover drawing, it’s obvious who ‘Tun’ refers to, despite the fact that we have a few other Tun still kicking about. (Even more impressive: It’s also easy to identify the ‘Dr.’ of Lat’s title).

The joke about Tunku Abdul Rahman being ‘Bapa Kemerdekaan’ (Father of Independence) and followed by Tun Razak’s ‘Bapa Pembangunan’ (Father of Development) was funnier when the punchline was the fourth PM being ‘Bapa Mirzan’ (Father of Mirzan). As it is, he now has to make do with making Mahathir ‘Bapa Teknologi’ (Father of Technology) (?) and have the fifth PM as ‘Bapa mertua Khairy’ (Father-in-Law of Khairy) Adding the ‘mertua’ (in-law) takes away some of the punch, no?

But still, Cartoons of Tun and Others is a good antidote (but also complement) to our tourism brochures. Saying it’s partisan is a bit like tearing open a box of chocolates only to complain it does not contain salad. The last cartoon (published 2006) has the antagonist walking away with face half-concealed and an inimitable smirk. And so the book ends – not with a bang but a snigger.