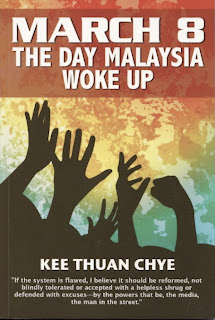 This book has been around for many a moon but I deliberately waited until the first anniversary of the titular date to begin reading it. I wanted to see how much of it would ‘hold up’, and on this count alone the book does succeed.

Kee Thuan Chye’s Introduction and opening chapter breathlessly recount his spine-tingling excitement at the result of our last General Elections. The great change that has taken place can be found in his words right there: just five years ago, for example, would a highly-placed editor in a nation-building paper like The Star have been brave enough to say that he’s always supported and voted for the Opposition? He’d more likely have been told to get a job at a non-existent paper like The Moon instead.

This, more than any statistic or data analysis, confirms the optimistic premise of this book: Malaysians have finally shown that we are capable of living without fear (Well, on a pedantic note: He’s no longer an Opposition supporter, at least not at the State levels of Penang ,where he’s from, and Selangor, where he lives.)

Kee’s is the only name on the front cover, but it’s more accurate for him to get an editor credit than an authorial one. There are many essays here by other public intellectuals who seek to answer the “why?” and venture thoughts on the “what next?” There are also interviews with politicians and members of media and civil society, and most of them are indeed sober and considered.

The few that are not so sober and considered provide, not surprisingly, the most memorable sections. To pick just three:

I loved Ann Lee’s Sabahan perspective; she moved effortlessly from childhood memories of collecting yo-yos to explaining why the citizens of her home state have every right to be peeved at how much they have been used and abused by the mainstream political machine.

I was also thoroughly charmed by Anil Netto’s debut venture (as far as I know) into printed fiction. He posits a utopian future for Penang, which is now so environmentally sound and effortlessly egalitarian that it reads like the optimistic version of Iain Buchanan’s Fatimah’s Kampung.

Among the interviews, the most attention-grabbing was Raja Petra Kamarudin’s. It’s in his trademark provocateur style, although he’s one of the few who says that if the Malay masses knew that they would get this result, they would have voted differently. It’s just a short remark but it helps to temper the sadly unfounded theory that Malaysians have finally gotten rid of racial politics. Raja Petra chooses to be coy only on the subject that forms the title of his interview: “How big are your balls?” And for this we can only be grateful; although I am in favour of a Freedom of Information Act, there is such a thing as knowing too much.

We are a year older, and Malaysians are getting sick of politicians. (That’s why I’m not mentioning any of their names here.) The Government has not learned to be fully responsive to the people, and some in the Opposition seem addicted to gimmicks, such as the alarming plan to take over the nation via defections.

In hindsight, this book would have benefitted from a chapter on the role of an unelected institution like the monarchy, to show that even non-politicians can have crucial political roles – that is, if we allow them. It should also have included some of the BN titans who suffered at the polls – were they not approached? It would have been fun to see their views challenged, or for them to challenge the editor’s views.

For views on how to improve the political situation, just pop into one of our warung kopi or engage the services of a garrulous taxi-driver. I wish there were a few chapters of that sort. We already hear a lot from the urban liberal intelligentsia. (But you know we love you!) For starters: having elections very regularly, every four years or so, would surely get rid of some unproductive suspense, and avoid the dates always favouring the incumbent … although they did seem to miscalculate this time.

I would like the incumbent coalition to some day become a good opposition front. The keyword here is ‘good.’ It would be good for the Malaysian psyche to have different people taking turns to represent us, so that we can further learn to separate party from government. Most countries in the world can do this without undue fuss, so what makes us so special?

Such a result would also be good for the present-day incumbents. Not holding Federal power will help the parties get rid of unwanted baggage in the form of hangers-on who are just in it for the cash and glory. This will help to strengthen and streamline the parties to really focus on delivering the goods.

Is this as much a dream as Anil Netto’s non-polluting tram cars of the future Penang? I think not. Just because we have woken up, this doesn’t mean we should ever stop dreaming. Remember: the ‘balls’ are firmly in our court.

Thanks for your review. So glad it finally came out. Also that it was generally positive. Snides aside. :-)

I have to say, though, that not only five years ago but even much earlier, I would not have been afraid to put in writing that I vote Opposition. You know me, I'm reckless about speaking my mind. Besides, I've always voted that way since the first time.

My name on the cover -- well, it wasn't my doing, but I think I quite deserve it. I conceptualised the whole book, I chased people for essays and got all the stuff together, I did all the editing, I did all the interviews (now, that's a lot of work -- just trying to get the appointments was no fun), I also wrote a couple of pieces. The book's got my stamp on it, so to speak. My propaganda, if you like. Or agenda. So, yeah, it's like, say, "a Ridley Scott film" with others doing the writing, acting, camerawork, editing, music, etc. Almost in the same vein.

Hey, I would have liked you to contribute something. You shoulda.

But then, this review wouldn't have happened. And I appreciate that it did.

Thuan Chye! If you are planning another book, you can count me in!