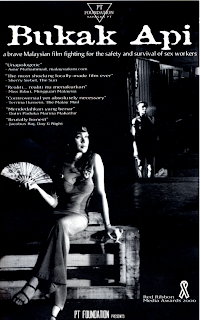 Bukak Api (2000) is a groundbreaking movie which started life as an educational video for the transsexual prostitutes of Chow Kit. But it evolved into something richer: an entertaining, deliberately melodramatic and highly impassioned defense of difference. It was never officially acknowledged as a 'film', but its 80 minutes glitter with chutzpah and compassion: one of the real achievements in modern Malaysian cinema. It's certainly the ultimate portrait of nocturnal KL.

Although the director Osman Ali was later given bigger much budgets for Puaka Tebing Biru and Anak Halal, those never quite captured the initial spirit he displayed here.

Now it is finally on DVD and can be ordered here! It includes Osman's very pretty 30-minute short Malaikat Di Jendela.
Posted by Amir Muhammad at 22:03

i want to get this 2 title but wasn't sure bout registering at dahuang since i'm not sure if i'll ever going to make a repeat purchase.

can i just request it from u? n i'll pay it using a bank transfer. i have a CIMB account but i don't mind using maybank also.

any advice on this matter is highly appreciated.

Oh, I am not involved at all. Best if you send an email to the contact info on the site and see if you can work something out.

Besides, registration is free what :-)

Ah, awesomes. Have made payment, nice and easy.

Only ever managed to see a bit of Bukak Api on youtube, and what I saw was dem intriguing.