He had a mischievous glint 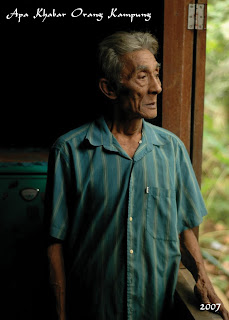 Just got word that Pak Malik, who was interviewed in our documentary Apa Khabar Orang Kampung, passed away two days ago. This brings the number of Malayan-born members in that village (comprised of the Communist Party of Malaya's 10th Regiment) even lower; certainly not much more than a dozen. They were among the pioneer batch to march across the Thai border in 1955. He never settled back in Malaysia after that.

He is the third interviewee to pass away since our shoot (which was only 15 months ago). He was in his 80s and had a lung ailment.

One of the reasons for the ban was a sentence he uttered in it, about the ability of Malays to keep secrets. This wry observation, delivered in an infectiously mischievous tone, was construed by the Censorship Board as "an insult to Malays."

He did not have much by way of possessions, but his face was testimony to an eventful life, which is more than can be said for most.

Al-fatihah!
Posted by Amir Muhammad at 22:05

may he rest in peace.

I'm so glad that you starting filming earlier to document their history before they are gone.