Everything he does is magic 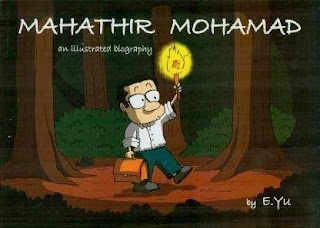 The first factual error in this book occurs in the very first panel, in which the birthday of our erstwhile Prime Minister (and current leading blogger) is stated as December 20. This is actually his “official” birthday but I always found it hard to believe because he did not seem to have much in common with laidback and fun-loving Sagittarians like myself.

True enough, his actual birthday is July 10. (It was not uncommon for folks born in the pre-war era to have registered birthdays that are different from the actual ones). So that’s all right then.

To say this book is a hagiography would be like saying a porcupine is a bit on the prickly side. But it is a riveting read because what is left out is just as interesting, if not more, than what has been put in.

Here are just four names that are conspicuous by their complete absence: Lee Kwan Yew, Musa Hitam. Tengku Razaleigh, and Anwar Ibrahim. Surely they could have added more spice.

Comics don’t have to be cuddly. You need only check out Persepolis or, closer to home, Where Monsoons Meet, to know that. But in its attempt to repackage or rehabilitate a famously prickly personality as a faultless hero, Mahathir Mohamad: An Illustrated Biography takes away some of the edges that surely make him such a fascinating subject to begin with.

True, we already have an anti-Mahathir comic book in the form of Zunar’s Cartoons of Tun and Others. But this new book is more ambitious because it aspires to the sweep and scope of biography. We learn how he was a diligent student (but shy around the girls), a caring doctor, a quick businessman, devoted husband and father, and then visionary politician and honoured statesman.

Although it is a feel-good book, there are certain hints that can invite different readings if you are of a suspicious disposition. For example, a montage of his political rise shows him addressing the hungry masses. But what he is quoted as saying is merely “Pot…pet…pot…pet…”

What gives? If the author didn’t want us to get distracted by small details, the speech bubbles could have been omitted; we need only see the aspiring leader’s fervent gestures and the crowd’s enthusiastic response. “Pot…pet” is normally shorthand for trivial banter, if not outright nonsense.

Another is a drawing of the protagonist praying, where the speech or thought bubble is left to contain only a string of dots. Does this mean he is mumbling or thinking nothing? Enquiring minds want to know!

A final example illustrates the leader’s fondness for horse-racing. There is another horse that seems to be catching up, but that rider is straining to make sure he doesn’t overtake the Prime Minister. Is this a veiled critique of the way he held back the careers of others, or more generally a sign of the feudalist nature of Malay(sian) politics that brooks no opposition?

Feudalism is the key to Dr. Mahathir’s controversial legacy. As the first national leader to not emerge from an aristocratic family, he represented the rude but necessary jolt of triumphant egalitarianism. His style is akin to the brashness of America rather than the ossified traditions of olde England. But when elements of feudalism started to creep in during his long leadership tenure, it was finally up to the people to decide that enough is enough.

Rather curiously for a comic by an ethnic Chinese, this book swallows The Malay Dilemma’s racial essentialism with nary a whimper. The greedy villains in the first part of the book are invariably Chinese and we are not invited to read the causes of the economic backwardness of the Malays in any other way. In fact, this divisive discourse is celebrated in the final page as then responsible for the harmony of today!

Despite everything, I thoroughly enjoyed the book. I got to see things I never thought I’d see, such as the leader in the shower (does he really keep his glasses on?). I look forward to many other comic books about famous Malaysians who are heroes, villains, or – as is most often the case – somewhere tantalisingly in between.

Very interesting write up. I purchase one of this book last month and I found that some pages in this book had very tiny words which only can be read using a magnifying glass. On the first panel itself, the actual date of Tun birthday is written on the baby itself. Quite amusing, isn't it?

Oh yes! I didn't notice most of those. But I noticed there were several animals named Jackie ...

Lee Kwan Yew can go to hell. And that neoliberal sodomist dude.