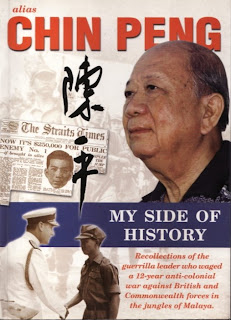 ALIAS CHIN PENG: MY SIDE OF HISTORY as told to Ian Ward and Norma Miraflor (Media Masters, 2003, 527 pages)

An early chapter begins with a sentence as good as any Dickens opening: “Several months after my 25th birthday, I discovered that I was, in fact, only 23 years old.” If the events of the past had been very different, might Chin Peng (the nom de guerre of Ong Boon Hua, now 85) have become one of our very best writers?

Life was different then. Births weren’t registered efficiently; people made difficult life choices; some of those choices vex us until today. That is why, despite not having made any public statements lately, Chin Peng has become the second-most discussed octogenarian in the country. That’s not surprising because, for over four decades, he led the country’s very first political party.

The Communist Party of Malaya was also the first multi-racial party, although you can see the snag very early on when Chapter 2 is titled “A Chinese boyhood in colonial Malaya.” That well-known colonial strategy of stark racial demarcation also ensured that the CPM never really succeeded in expanding its reach, and this proved one of the factors that led to its marginalisation.

Chin Peng has lived in our popular imaginations as all sorts of things, and it’s with a sense of shock that we discover that he’s just a man. I also hadn’t counted on this book, whose very title is intelligently aware of narrative subjectivity, to strike the occasional droll note: recollecting his boyhood membership of a church choir, he says that he probably could still sing Christian songs now -- “if my life depended on it.”

I had looked forward to his account of the killing of the Sungai Siput planters, the event which triggered the Emergency. Although he says it was done without his knowledge, and that he regretted that the youngest planter was targetted (he was a new arrival in Malaya and couldn’t have known much), he ends the section with: “The deaths of the other two were acceptable.” No longer droll, just chilling.

Then again, these were people at war. The Emergency was merely a euphemism for the longest undeclared war in Commonwealth history, with tolls on both sides. Within the context of armed revolution, a white planter embodies precisely the type of capitalist exploitation that needed to be eliminated.

We have become subconsciously used to the idea of British rule as not only relatively benign but, given the circumstances of the time, somehow natural. Thus, the wounded and dead who fought on behalf of the colonial elite are protecting “the rest of us” while anyone else becomes, well, unnatural. It seems almost impossible now to imagine that if history had gone the other way (and in the decade after WWII, communism was seen as a global force not only by its supporters) we would have very different ideas of heroes and villains.

Among the rich cast of characters, the British soldier John Davis, who formed an alliance with the communists to get rid of the Japanese, emerges particularly vividly, as does the book’s villain, the triple-agent Lai Te. The unlikely friendship between Davis and Chin Peng points to how people could be ideologically opposed but still respect each other. This is something few of us appreciate nowadays.

No politician should stay in power so long, and the second half of the CPM’s active existence did indeed see the group unravelling through internal bickering and witch-hunts. But it’s the stubborn pride of its leaders that resisted a total surrender; after all, pride was one of the few things they had left.

The last chapters detail the long road to freedom...or at least out of the proverbial and literal jungle. He stops short of calling Mahathir our Mandela, but Chin Peng acknowledges the 1989 peace accord between the governments of Malaysia and Thailand as well as the CPM as a model of a dignified settlement.

It appeared that we could finally set aside our respective hurts and just move along. After all, nations with arguably more traumatic pasts, like South Africa, could reconcile their divisions, so why can’t we? Just as we shouldn’t forget history, we shouldn’t be strangled by it either.

Respect the promises we made two decades ago, and let the guy come home. There's a word for people who break their promises -- and that word is far dirtier than 'communist' ever will be.

Many in our generation never experienced communism or the Japanese occupations. How could we understand the suffering or "truth" of the past generations. Right or wrong, its very subjective indeed. Should we continue to live ignoring him or to accept him? Should we allowed him to return for a promise we made or should we break the promise to forget the past? Yet, who has the power to decide a man's life?

I will stand neutral ground on this.

But the people who are the breaking the promise are the ones who are doing the least amount of "ignoring him" and "forgetting the past," no? Abdullah CD and hundreds of others could visit Malaysia, and even stay here, without any undue bother.

The communist killed my grandad who was in the army and put his body infront of our hse, they shot down the Nuri helicopter my uncle was co-piloting and killed him and all 11 on board. And I'm expected to forgive its leader who cruelly took the life of people close to me? I am a child, grandchild and nephew of people who defended this country against the communist terrorist and gave their life in that process. Is forgiveness of its leader expected from me? Let him die and rot in the jungles of Thailand and never set foot in Malaysia where his ideology spilled the bloods of my kins who defended this country against his ideology and his people. NO TO CHIN PENG AND COMMUNISM!

He's not asking for a Datukship, just for the government to keep its word.

"...just for the government to keep its word."

Hahaha! Good one. Nice to see your faith in your overlords remains undiminished.

i am worried if he comes 'home', someone will snipes or stab him. Poor old man.. better be safe. Forget the past. Don't look back old man.

yes agree with anonymous..
Our Gomen dont let Chin Peng come back to Malaysia just for his own safety ok...Thats the main reason.

Our PM Najib just confirmed: China (which sponsored the CPM for several decades) has never been a threat to this country and this region.

"There's a word for people who break their promises -- and that word is far dirtier than 'communist' ever will be."

but i don't think that word even a tiny-winie-winie bit dirtier than 'mass murderer'..

think about this situation:

there is this fierce murderer who killed ur friends. he caught you and your family. he then offered you a deal so that u and ur family can be freed. so u accepted it (there's nothing else u think u could do). than he let you go. u r now TOTALLY FREE from him.

say u promised to give the murderer a million ringgit earlier, will u now do what u hd promised to do or will u just go to the nearest police station and lodge a report?

forget about that Ancient/ Old/ Outdated Doctrin (Communism).. let us look for our future. Forget about old man Chin Peng, let us think how to build this 'evolving' New Malaysia. Most of the Malays, Indian, even Chinese still hate Communism.. just forget about Chin Peng, please.

about my last comment, i really want to know what's ur answer..

I vote for Mandela.

i read the blog, and i just see a boy needing attention around him.

Call me ignorance but I don't really care whether the old man return to Malaysia or not (even if the government really did allow him, it's hard to imagine him opposing any real threat anyway, and not like he has been doing so too; n I think the government will shower him with endless injunction like can not go public toilet so somethin' *snigger). But I DO CARE how new Malaysian perceive issues and matters.
They can all wear green uniform, neither the CPM or the army then but just simply they have been named differently by ruiling party, they've been given the cursing crown for life. Yes, categorizing them for us for 'easier understanding' and to help us easily dismiss to look for real facts and true stories even agenda behind rocks. If that's not enough, add in some cili peper of anger and tongue/mind numbing bitterness so that we make no mistake how we received the smeared image and continue to become too lazy to seek for truth. It's all given mah, don't bilif me, go check ur primari skool books la, it's all there ma. See told u! teacher also said like that, mah like that la