Who wouldn't want to kill him? 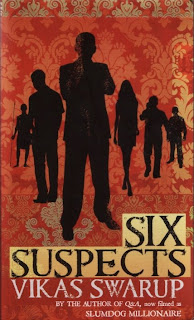 You can’t read Malaysian books all the time, of course; you will go bonkers! Although our publishing output is more varied than our news – microwaving the Cold War yet again? are we still wondering if theocrats can be liberal? – it’s good to take the occasional break.

Let us go to India! Just as The Book of Batik concerns us even though it was entirely about Indonesia, we also owe great debts to India. Our national language and royal customs, to pick just two obvious examples, would be very rudimentary indeed without motifs from the Motherland.

Luckily for us, Six Suspects is an absolute delight. The only Malaysian novel I know of that comes close to its madcap invention and satirical outrage is Brian Gomez’s Devil’s Place. It’s much longer and more sprawling than Vikas Swarup’s famous debut Q & A (filmed as Slumdog Millionaire, which I still haven’t seen) but it’s yet another diverting Technicolor romp through a country whose colour and contradictions make our own national dramas seem terribly pallid in comparison.

Q & A had as its hero an orphan whose origins (unlike in other novels about orphans) we never discover. He also chooses a name that is part Muslim, part Hindu and part Christian, so he can literally be anything he wants. It was tightly coiled story whose humour initially seems too cutesy, but which gripped and charmed way before its fairy-tale ending.

Six Suspects is a murder mystery but instead of following a detective around, we hang around with the five men and one woman of the title. The corpse is Vicky Rai, a young man who’s so corrupt and despicable that the question isn’t “Who killed him?” but “Who wouldn’t want to kill him?”

The cast of characters, with their various tangled motives, is delightfully improbable but we willingly surrender because Swarup knows how to keep us keen. There’s a boozy industrialist who seems to get possessed by the spirit of Gandhi; a self-absorbed but erudite Bollywood actress; a tribal man from one of the earliest civilizations on earth; a slow-witted American who was conned into coming to India; Rai’s father, the Home Minister who’s already bumped off many others; and (the character most similar to Q & A’s Ram Mohammad Thomas) a petty thief who discovers a suitcase with literally more money than he can count.

People are either on the make, on an impossible quest or hiding something, sometimes all at the same time. The template for the Western comic crime caper was perfected by Elmore Leonard, but the master’s laconic style is here wedded to a deliberately overburdened and over-determined plot that teases and twist and has not one, but three false endings.

Swarup, a career diplomat who writes in English, must be very aware of the perceptions that outsiders have of India. He deliberately crams in as many of these recognisable elements as possible – political assassins, eunuchs, religious terrorists, caste discrimination, holy pilgrimages, bomb blasts, call-centre operators, mystics, and even Bhopal victims. What saves us from a case of the dreaded ‘Delhi belly’ is his humane vision, confident mimicry and unflagging humour. The solution to the murder is more than just clever, it’s cathartic in a way the genre rarely sees.

We in Malaysia might have a narrower palette to work with, but aside from Devil’s Place I am confident we will come up with our own entertainments. All it takes is for a talented writer to peruse the news everyday … and get very, very annoyed.