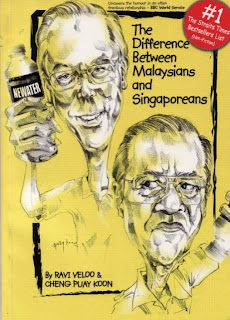 Back in the late 90s, I worked for a few months in Singapore. One of the things that I remember startling me was a billboard, visible from my HDB flat, created out of the winning artwork of a kindergarten-level competition. It showed a bunch of shiny, happy people, but it came with the multicoloured crayon tagline “Low crime doesn’t mean no crime!”

Heavens! Is this what Singaporean children had on their minds? Although there was much to enjoy in the republic, I knew that I had been staying too long when, in the middle of the night, I found myself waiting patiently for the red light to change before crossing the road. There were no cars in sight, but I somehow knew I was being watched, and I so wanted to be a good resident!  I never would have been so vigilant in dear, dirty KL.

But listen to me prattle on; I am sure you have your own anecdotes. In the decades since Separation, many sly digs have flown across the Causeway and Second Link. Singaporeans are supposed to be regimented, humourless, materialistic, while we are, well, I am sure you can figure those out for yourselves! We each had one now-octogenarian patriarch, and we weren’t afraid to use them.

The Difference Between Malaysians and Singaporeans, by a Singaporean man and a Malaysian woman, doesn’t offer much that’s new, but offers a few comfortable chortles. Each illustrated spread operates on the principle of juxtaposition: on the left page, we have what “Malaysians” do, and on the right side what “Singaporeans” do.

To say that it trades in stereotypes would be like tearing open a box of chocolates to complain it doesn’t contain cabbage. But the stereotypes are sometimes inverted: for example, “Singaporeans’ favourite dish” is chicken rice, while “Malaysians’ favourite dish” is ASTRO. Then the next spread returns to the expected: “What Malaysians think chicken looks like” is an actual thing with feathers, while the Singaporean equivalent is a box of chicken stock.

I wonder if that sort of competitive but grudging camaraderie is starting to break up. Each country now has more and more citizens who weren’t born on these shores – Singapore recruits foreign talent to stay cutting-edge, while we haul in new citizens, especially in Sabah, to help with election prospects. (That’s an amusing new juxtaposition right there).

So maybe the shared vocabulary (kiasu, chewing gum, ethnic quotas, water, and so on) is no longer as, well, shared as it used to be. We might start just thinking of one another as shopping destinations, without the contextual baggage of a common, and sometimes mildly acrimonious, history.  (Of course it has been mild. It wasn’t Singapore, but another neighbouring country, that once sent in the troops!)

The fun is mostly slapstick but often pointed. The very last couplet contrasts the ethnic discrimination in both countries. It would have been easy (the book is printed in Singapore) to say that the republic is race-blind, but there’s instead an acknowledgment that some pigs, I mean people, are more equal than others. Which isn’t, of course, to say that two wrongs make a right.

I will end with yet another personal anecdote (I can’t get enough!) My latest documentary Malaysian Gods was passed by our own Censorship Board but with the bizarre condition that it “cannot be screened in cinemas or TV.” While the Singaporeans passed it, allowed one screening, but insisted on a police permit for me to talk there. So if  I were asked, “Is the Malaysian system illogical, while the Singapore system uptight?”  I would say, “Sure! Now let’s enjoy the rest of our lives.”

The book is now sadly out-of-print. Perhaps an expanded edition taking into account the changes since 2002 would be in order. For starters, the PAS that is painted here (“radical and extremist…firebrand”) isn’t really as frightening to Malaysians now. To explain why would require another book, with or without cartoons. And that’s what we will do next week.