The other censored line from MUALLAF

Two lines of dialogue from the film have been muted. I posted the first one earlier. Now this is the second. 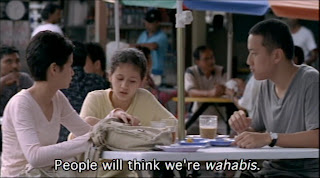 You won't get to hear the line or read the subtitle. Other that that, all the dialogue is intact! Yasmin had agreed to both mutes months ago, because she wanted the film to finally be seen by Malaysians.

So do watch Muallaf, which starts on Thursday! Try to watch it by Sunday, because the box-office takings for the first four days are crucial to determine whether the film goes into its second week. So many people say they are here fans, so what better way to demonstrate this than by watching her final film to be released in Malaysia, on the big screen as intended?

The film is rated 18PL; in fact, it's the only Yasmin film to get this restrictive rating, putting it in the exalted company of Bohsia: Jangan Pilih Jalan Hitam and Jalang.
Posted by Amir Muhammad at 10:19

dear amir muhammad,
i've read your book on reviews of yasmin's films.
i would like to appoint a mistake you've, perhaps, ignorantly comitted which concerns tudung.
I didn't buy the book or know anyone who possessed it and thus, i cant make accurate reference but you, who have written it, should remember well that you've claimed that there is no prove in Quran that women have an obligation to wear tudung and instead are only suggested to wear moderately (which i interpret as tudung is not necessary?).

If you do a little research there're lots of hadith suggesting women to wear tudung/jilbab/headscarf and if you do not know mr.amir, hadith is the second reference next to quran and so, shold not be taken lighly.

man, you can be so WTH at times.
i respect your opinions and you have some great views on things but with facts, especially concerning religions, please becareful.

ps:the ayat quran on aurat is even in highschool textbooks man.

Isn't it interesting that the translation you used (whose?) makes it appear that the verse is talking about the purdah (covering faces) rather than tudung? Reading the whole section (in my book) makes my intention rather clearer. Wallahualam.