Love in the time of Emergency

(The January issue of TELL magazine kicks off my year-long column on old Malay movies. Here is the first one. You should still get the magazine because of a 6-page Scary Datin Fashion Parade that has already provided much joy around here. TELL doesn't have a decent website but a Nigerian magazine of the same name does).

The oldest surviving Malay movie is called Cinta (or, to use the spelling of the time, Chinta). It was released on 31 October 1948 even though it is not a Halloween-themed movie. So this year marks its 60th anniversary. It is also the 75th anniversary of the first (now lost) Malay film, Laila Majnun (1933).

To celebrate this double anniversary, I will talk about selected old Malay movies, chronologically. My definition of “old” is a shamelessly subjective one: “before I was born.” So we will travel from 1948 to 1972.

Siput Serawak plays a damsel who is very forthright indeed. When two strangers wash ashore after a shipwreck, she immediately takes a fancy to the younger and handsomer one; he is played by S Roomai Noor. She literally takes him by the hand to go swimming and they sing about the birds and the bees. This is intercut with actual footage of insects landing on flowers. The sea is always available to them, since no one seems to be fishing. 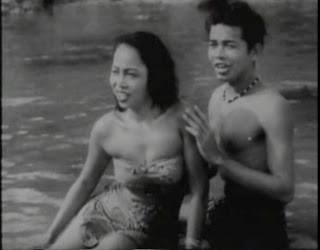 Surprisingly, her father never retorts with “You’re not going out dressed like that, Missy!” Although not explicitly referenced except for two mentions of ‘dewa’ (and an actual Balinese-style idol statue) the setting is somewhat pagan, so there is no danger of khalwat squads busting them.

Unknown to Siput, Roomai is actually the King of the neighbouring Indrapura. He just doesn’t want to reveal his identity. This is OK; her love don’t cost a thing. The two have such great sexual chemistry that it continued into real life, for the couple then wed to give the world a diva named Anita Sarawak.

The only person unhappy with this liaison is a poor fisherman, (played by P. Ramlee in his first role) who has the hots for Siput. 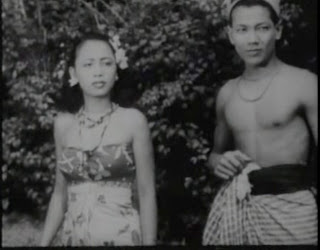 When Cinta was released, the Federation of Malaya had just entered a state of Emergency. A few months earlier, rogue communists had killed European plantation managers, and this marked the state of curfews and a clampdown on freedom of association. Left-wing parties were banned. These parties had just a year before organized a very successful nationwide strike that threatened to cripple the economy. So 1948 marked the decline of leftist influence. These parties were the first to call for Merdeka. As of 1948, the slogan for the 2-year old UMNO was still ‘Hidup Melayu” rather than a call for independence.

This backdrop of political agitation is mirrored in only an oblique way in Cinta. The second half of the film contains a flashback that reveals Siput’s true identity: She’s actually a princess who was smuggled out of her kingdom (Indrapura!) to escape a murderous coup. The guard who smuggled her out had been raising her as his own daughter. (Perhaps his awareness of her royal status is what prevented him from lecturing her on the impropriety of cavorting with a male stranger. Either that, or he’s a liberal).

Since we now know that both of them are from the Indrapura royal family, I was kinda worried that I had been watching a film about incest. But it’s not that: Roomai is actually the son of the successful, now deceased, coup leader. But then again, since many royal tussles take place between siblings, perhaps the two are cousins after all?

So her step-father tells Siput that she must avenge the death of her parents. How? By killing the current King. She doesn’t know how he looks like, but she agrees to go on a regicide mission. (There were no photographs at that time. Otherwise, she would have noticed her lover’s portrait hanging on the wall of every government department and most mamak restaurants she passes).

She and her step-father sneak into the palace and almost kill the King in his sleep. But this will not be a tragedy. There is a ‘recognition scene’ and she also recognises the futility of revenge – just in time for a happy ending. Even P. Ramlee, instead of vowing his own revenge for losing the girl, is left singing the blues with his mates.

The fact that a bloody coup could be resolved through the love of the next generation is a sweet one. The history of Malaya did not prove to be so forgiving. The Emergency, which was just starting, is among the longest and bloodiest undeclared wars in the history of the Commonwealth, with thousands of casualties on each side. All you need is love, eh?
Posted by Amir Muhammad at 12:56

Hello, Amir. Congrats on the new column. Where can one find old Malay movies, preferably on DVD?

They tend not to be on DVD but VCD. Any video shop like Speedy or Music Valley will have 'em. They have white covers.

diorang sexy lah. hahaha. are we allowed to do that nowadays? i mean, i dont really know the criteria for a "decent malaysian" film.

it all sounds divine! must check out speedy next time am in town.

Wow. I am always struck when I see these old movies by how much things have changed, and in such a short time, too. In the grand scheme of things, 1948 was not that long ago.

Is Cinta explicitly set in any particular century? It's really hard to tell from the actors' clothes, which are a really interesting jumble of 1940s beachwear and, er, traditional Malay clothing? -- but then your mention of dewas and Balinese statues suggests that it's set in pre-Islamic times. Is there any evidence of a historical context (e.g. references to other historical figures) other than that?

Is it a 'purba' [rather then period] movie, which means it is not set in any particular time or place :-)