Off to Europe for 2 weeks! 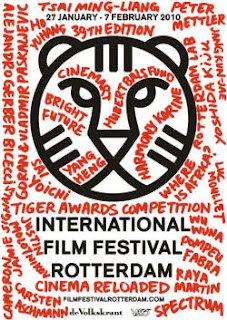 Later today, Insya-Allah, I will leave for Paris for a few days to take part in Singapour, Malaisie : le cinéma!, an ambitious retrospective that screens around 60 films from the early studio days of Malay cinema in Singapore right to the newest films from Malaysia and Singapore. Two of my documentaries, The Big Durian and Malaysian Gods, will be screening there.

Although the programme is ambitious, there were quite a few snags along the way. There's the perennial problem of older prints not being kept in good enough condition to show. French subtitles had to be made, a process that became quite slapstick when some couldn't be done in time. Then the Pompidou Centre staff went on strike in December (ah, the French!). But after all these tribulations, it's finally here.

There are many reasons I look forward to this event. One of them is the chance to view the P. Ramlee film Gelora which is totally unavailable on VCD here, and which never shows on TV. It's supposed to be saucy!

I was invited to this event about six months ago and said yes. Since I published Yasmin Ahmad's Films in the meantime, I asked the organisers if I could also do a talk based on the book and her films, and they agreed (since they are showing three of her films: Sepet, Gubra and Mukhsin). This talk will take place this Saturday!

I feel the need to stress the chronology because I have been accused of 'exploiting' Yasmin to get a free ticket to Paris! Strangely enough, this accusation came from someone in the film industry, who should know that I have been getting invites to screen in film festivals since late 2000, years before Yasmin made her first feature film. Ah well, as the French are prone to strikes, the Malaysians are prone to making envious accusations: c'est la vie!

A few days later, I will be off to the International Film Festival Rotterdam. Malaysian Gods is one of 4 films from our shores to be chosen. The others are My Daughter by Charlotte Lim (in competition), Woman on Fire Looks for Water by Woo Ming Jin and At the end of Daybreak by Ho Yuhang. I have only seen the last film (last month in Jakarta) and look forward to the other two.

Although the weather in Rotterdam will be miserable, this is the festival with one of the two best programmes I have ever experienced (the other is Buenos Aires), where it's possible to watch 5 films a day and not get bored. I look forward to meeting up with many of the people I meet only in film festivals! Yes, the only element I am emphatically not looking forward to is bundling up against the cold and the damp, but we've all got to make sacrifices.

Some fun for the coming weekend 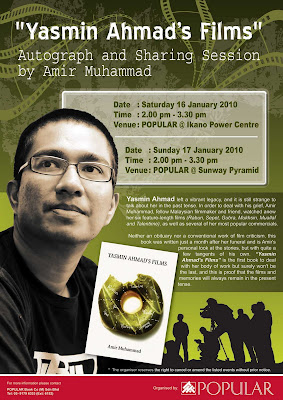 In case you're overwhelmed by all the green, the dates again are:

I never actually saw Ong Bak so I can't comment on similarities. But there's much to enjoy in Merantau: the buns of steel, the dialogue of wood, the fights of brutal poetry, the hilariously timid subtitles, and the fact that Christine Hakim seems to have wandered in from an entirely different movie. Oh yes, the political subtext, with its parallels to Avatar (notice how the villain looks like Dubya). I wonder why the distributor didn't put in Malay subtitles on top of the English & Chinese ones though, especially for the Minang scenes.

The version screening here is the international cut, which is about 30 (yes, 30) minutes shorter than what the Indonesians saw. I don't think any of the fight scenes were dropped, though.

There will be some people who will recommend this film for 'introducing silat to the world.' I guess these are the same strange people who will watch Avatar because they care about rainforest conservation. A popcorn flick is a popcorn flick, regardless of whether it comes in a Padang flavour.