Fixi will also publish books in the American language. This is the manifesto for Fixi Novo. 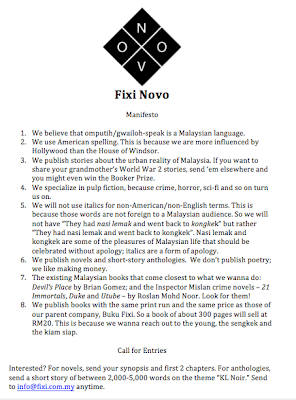 Do spread da word!
Posted by Amir Muhammad at 18:26 No comments:


The last MALAYSIAN SHORTS of the year!

Most of the directors will be present, so grab them & talk to them!

You may also VOTE for your 3 favourite shorts of the night!

Entry is FREE and open to everyone. Spread da word!


TANGGAPANMU (8 min)
Directed by Adib Zaini & Nadia Khan
Three friends get more than their money's worth during their vacation when they bump into a politician at the hotel...


Y3LLOW (12 min)
Director: Ang Yee Sien
Bulton is terminally unlucky. A twist in fate happens when an unexpected object arrives. Made in England!


PASPORT EKSPRES (18 min)
Director: Rewan Ishak
Ali wants to be a filmmaker but he is feeling uninspired and pressured with other things. He decided to go back to his home state, Perlis.