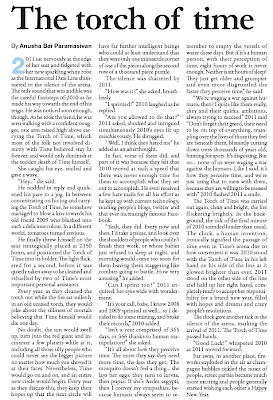 14 stories in 14 issues, and the editor tells me that "the queue [for new stories] now is very long." This is great news.

By the way, I don't know Anusha. It's great that there are Malaysian writers I don't know; otherwise, the scene would seem so small!

The full issue is here!
Posted by Amir Muhammad at 15:41 4 comments:

Invitation to watch 12 of the 120 MALAY MOVIES

One of FAQ for this book has been: "How do I get to watch these movies ah? How ah how ah?"

Well, keep the next two weekends free and you can watch 12 of them! These are 12 that I lavished particular praise on. I made sure not to include any P. Ramlee movies, because those tend to be easily available already. It would be my pleasure to introduce you to films that you may not have seen, or not seen recently.

The venue is in Taman Tun Dr. Ismail (you may confirm here) which, unfortunately has no LRT station. But it shall be a cosy event, admission is free, and bring your own kuaci. I will introduce each movie.

This is a song from the very first movie we will show. Unfortunately the synching on Youtube is not as good as what you will see on Saturday 2pm, but you get the idea:

Posted by Amir Muhammad at 09:56 No comments: 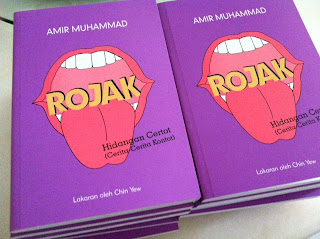 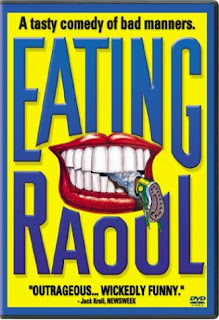 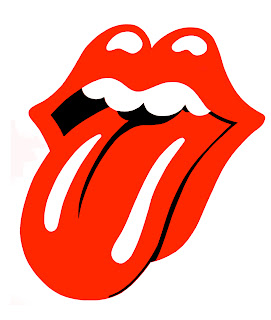 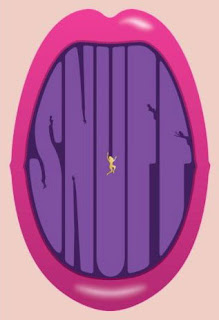 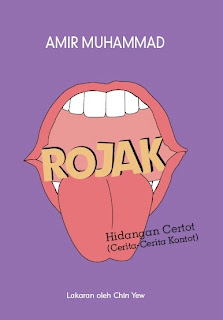 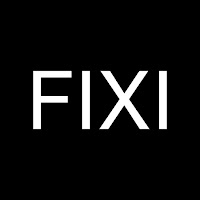 Email ThisBlogThis!Share to TwitterShare to FacebookShare to Pinterest
Labels: FIXI 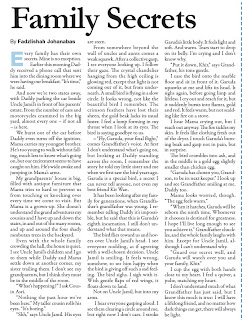 This is the first story in the paper that I would like to read the sequel to!

Fadz is a doctor and blogs his fiction here.

Screening of new (mostly Malaysian) films! All under the theme of KISS (Keep it Short, Stupid).

Entrance is free. Many of the directors will attend. Best of all, there will be Walls Ice-Cream! 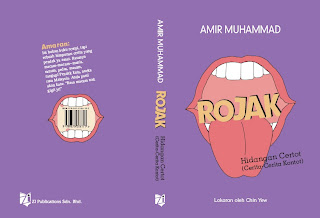 This event is held in conjunction with LiFest, to raise funds for Yayasan Kurang Upaya Kelantan (YOKUP). You may confirm on Facebook.
Posted by Amir Muhammad at 16:32 No comments: 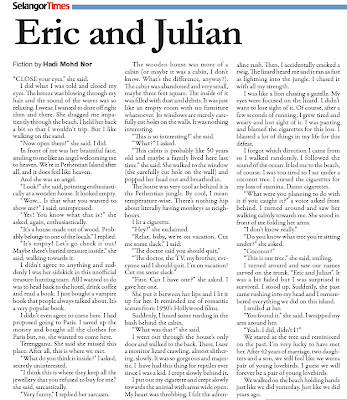 How cool that there have now been 10 stories! Hadi is the first person that I am not at least Facebook friends with; I wonder who he is?

The rest of Selangor Times can be read/downloaded here.
Posted by Amir Muhammad at 20:38 3 comments:

For Tunku Abdul Rahman's 108th birthday, my chapter on his RAJA BERSIONG from 120 MALAY MOVIES

This is the most expensive movie in this book .

It’s based, of course, on the same Kedah legend that was made into the 1963 movie. But this is in wide-screen colour, with a Japanese co-director and cinematographer, and a screenplay by the Prime Minister Tunku Abdul Rahman (his second and last after Mahsuri). It cost ten times the average budget for a Malay movie but was a flop when released. It was one of the final nails in the coffin for Shaw’s investment in Malay cinema.

Its place in cinema history aside, I can’t help seeing this Raja Bersiong as the end of a different kind of Malaysia, too. This film used to be shown on TV but has been noticeably absent for years; I guess its depiction of religion is a key factor. The colour Raja Bersiong seeks to be more faithful to the Hindu-Buddhist roots of Kedah royalty, and there are numerous scenes of Malay actors going to the kuil (temple) to pray, which our censors no longer allow.

There is also a distinct Thai flavour to the costumes and dances, which might seem surprising until you realise that Kedah had strong cultural ties with Siam and became (a few centuries after the events of this myth) a Siamese protectorate.

While Malek Selamat in the 1963 movie starts off (and actually remains) a sympathetic king with an unfortunate addiction, Ahmad Mahmud here is a raging psychopath almost from the beginning. At the 10-minute mark, he is visited by a demon, and from then on, all bets are off. Crucially, he is shown as decadent and venal even before consuming the spinach soup which had traces of blood in it. When the next day’s soup doesn’t please him nearly as much, he badgers the cook (Normadiah) to find out why:

When told by the trembling woman of the unintended secret ingredient, his eyes start to glow. He barks to his henchman to take a jailed traitor, drain him of blood, and then use that blood for his special spice from now on:

Yes, this is the first film we have seen since Panca Delima to consist of rhymes. (This time, I summarised at the beginning instead of translating.)

The anti-feudal theme is especially strong here. This might seem surprising because Tunku Abdul Rahman himself was of royal blood. The movie is also about the pressing need for a change in leadership; the king was out of touch with his subjects. Is there a deliberate self-critique by Tunku going on? Did he already know that there were people within the Establishment who were plotting to get rid of him?

The priest urges a more peaceful — but, to secular ears, more batty — way out: they should consult a gajah sakti (sacred elephant). This elephant actually does appear in the end, and helps resolve a pressing issue of lineage. The new, worthy heir to the throne was born in the house of a commoner,
and this is a clue that democratic egalitarianism promises a better future.

This Raja Bersiong isn’t the intense character study of the first film but it’s splashy and enjoyable. Ahmad Mahmud and his queen Sarimah look great, and I love the way she maintains haughty decorum when it’s obvious to anyone that he is now a dangerous loony. Our interest dips a bit when he redeems himself in the second half, however.

What this movie made me realise is the extent to which the discursive terrain of Malaysia has been dominated by the south of Peninsular Malaysia. The Kedah kingdom started earlier than Melaka, but it is Melaka that gets privileged as the foundation point of our history. This despite the fact that two of our most influential Prime Ministers (Tunku Abdul Rahman and Dr. Mahathir) were from the north. What gives?

Is it because the Portuguese and therefore the West took over Melaka first in 1511, and the other states lost their feudal autonomy much later? The story in Hang Tuah and Hang Jebat would have been yawningly familiar to any local schoolchild, but I dare say that the story of Raja Bersiong got a big boost from the two movies. The task of investigating other aspects of Malaysian history and mythology is something well worth doing.

The colours are a clashing riot and must have looked much better on the big screen. As it is, there is no DVD or even VCD of this film in release. I had to watch a bootleg pan-and-scan version. The whole thing is also available on YouTube, of all places. This is the final irony of Raja Bersiong: despite its lavish cost, it is now on the same level as any video footage that a teenager with a bit of spare time can upload. In other words, it’s democracy in action.

* 120 Malay Movies is available in shops! Or you can order it directly from me by emailing info@mataharibooks.com
Posted by Amir Muhammad at 10:31 No comments:

Why are our Chinese movies more cheerful than our Malay movies?

OK, I am basing this only on the four movies that have been released so far in 2011. My favourite is this:

Great Day is a feel-good tale about the pleasure of family. Even if some of the younger people don't have as much time as they would like to spend with their elders, the movie does not condemn. It is a warm cinematic embrace of compassion. A particularly poignant moment had a little girl (unused to the Roman alphabet) mistaking the 'Alor Setar' sign for the 'Arau' one. It brings home the point that Malaysia is a land of overlapping cultural discourses; if we don't see the 'signs' we can relate to, it's up to us to create these 'signs'.

Funnier but also waaay schmaltzier, Homecoming is a Singapore-Malaysia collaboration that makes great use of the comic presence of Jack Neo (in drag) and Afdlin Shauki. There's much frantic hand-waving, toilet humour, and plot contrivance, but it posits that Singaporeans and Malaysians are part of a big family. Although (to comply with Singapore language restrictions) the Chinese dialogue is all in Mandarin, I am told that 'diversity' is still sneakily celebrated by having many different slang/dialect forms of Mandarin.

Khurafat shows that Syamsul Yusof can direct! There's a neat twist in the end, and the night scenes look great. But it's also unrelentingly gloomy, right down to its cynical, almost masochistic denouement. On one level, it's about the failure of Malay patriarchy: Shamsul in an early scene is shown 'leading' women in prayer, but in a later scene 'following' the women at a funeral procession. The traditional moral authority is reversed, but what comes in its place? It starts from lust and black magic, and the movie revels in recrimination: it's too late for regret.

Haq is similar to Khurafat in that it's also obsessed with guilt and sin. It moves at a more lugubrious pace, but what's dismaying about this movie which claims "the application and promotion of Islamic concepts" is the absence of redemptive hope: The 'bad' are simply born 'bad' and remain 'bad' and deserve to be killed. The scenes of luxury are well-depicted, but oddly funereal: Why aspire to success if your life becomes an empty shell? And in marked contrast to the two Chinese movies, family members (even when supposedly close) don't seem comfortable together.

The recent news that local films not primarily in the Malay language can now be classified as 'Malaysian movies' and receive the same valuable tax breaks is a good one. If these four films are any indication, watching only Malay movies can be seriously damaging to one's sense of cheer. Let's have a bit of life-affirming variety, before cinemas start giving out free razor blades with the popcorn.
Posted by Amir Muhammad at 11:35 11 comments: