Yes this is ample notice, but in Singapore one must plan ahead! 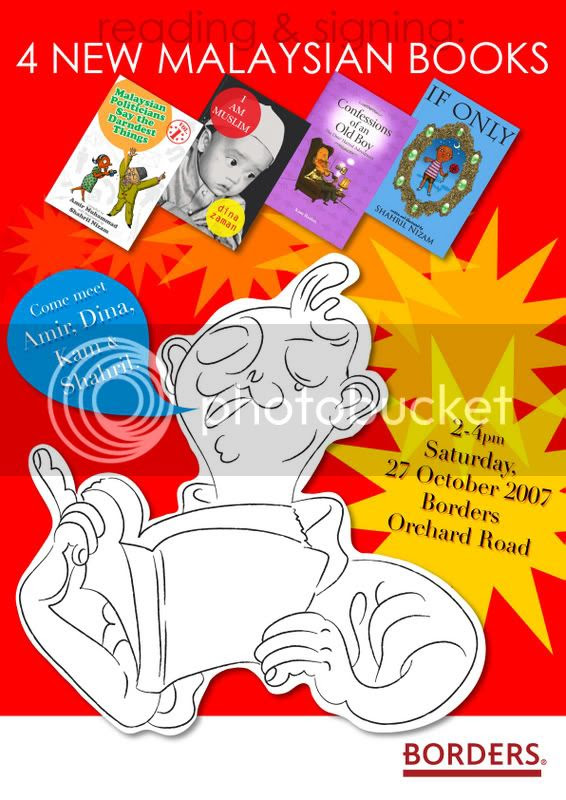 Poster by the ever-talented SN.

You can even RSVP on Facebook, a site which sucks up much of my time.
Posted by Amir Muhammad at 09:37 3 comments:

Email ThisBlogThis!Share to TwitterShare to FacebookShare to Pinterest
Labels: EVENTS

From Kinibooks just a moment ago: 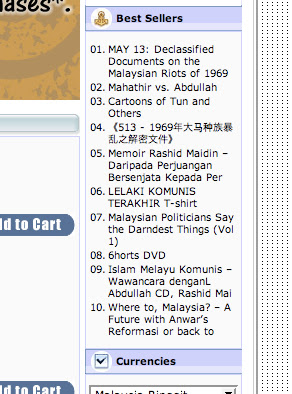 The only place you can order it if you happen to live outside Malaysia and Singapore :-)
Posted by Amir Muhammad at 00:01 4 comments:

Back at Amcorp this Sunday (uh huh uh huh)

Me and Shahril Nizam will be back in the groove at the Amcorp Mall flea market this Sunday, 10am-5pm, to sell the books.

This will be the last Sunday we can do this for quite a while, as for me the following Sundays are booked up with other matters promotional, festive and cinematic.

We should be somewhere on the first floor and I shall try my darndest to get a better location this time! Do drop by if you can. 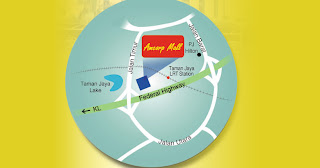 Posted by Amir Muhammad at 01:52 No comments:

Saw this English translation of a local novel at a bookstore: 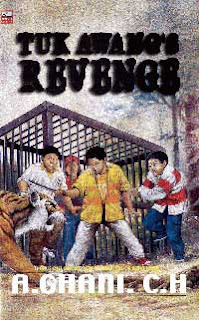 Picked it up. Couldn't browse as it was wrapped, which I always find irritating. So I only had the blurb on the back cover to read. And this is what it said (I am not altering a single letter):

He is not the one who blaze all this thing happened. He only defend his family dignity who were brutally murdered by somebody. Hence, does he find guilty because of killing his aims, just return the vengeance?

The book is published by Creative Enterprise, one of the most successful publishing houses in our fair nation.
Posted by Amir Muhammad at 16:15 7 comments:

Malaysian Politicians Say the Darndest Things can now be purchased at most bookstores in the country.

It is in all MPH shops, as well as Borders, Kinokuniya and Silverfish. You are less likely to find it in Times and Popular.

Please note that the version in bookstores is the second edition. It has slightly thinner and slicker (but still recycled) paper.

The remaining copies of the first edition can only be obtained at Kinibooks or at one of the events where I sell the thing myself.
Posted by Amir Muhammad at 10:30 6 comments:

'Where Monsoons Meet' back in print

A few months ago I wrote two articles for my NST column.

The paper refused to print the longer one (since plagiarism is a touchy issue there) but printed the shorter one.

It was about Where Monsoons Meet: A People's History of Malaya, an illustrated book (reminiscent of those A Beginner's Guide to ... thingies) that looks at our country's history through a Marxist, progressive type of lens. There are many historical books coming out now, but none takes quite the same approach. At the time I wrote it, the book had been out of print for over a decade.

Imagine my surprise when, after reading my article, a publisher called me up to say that he intended to bring the book back into print in time for Merdeka.

He appears to have been a few days late but ... here it is now, and also in bookshops, and it includes my article as Foreword.
Posted by Amir Muhammad at 10:39 3 comments:

Where else we will be this weekend

We are setting up a booth to flog the books at the opening of artist Sharon Chin's exhibition tomorrow, Banned Books & Other Monsters. It's a multimedia, interactive kind of exhibition, although the invitation card is intriguing enough to not use a single picture and so I have no idea what to expect...(Although Kakiseni has lots of spoilers.)

Yes, it's in the same building (but not same floor) as the launch but it should be a slightly different crowd. The 'visual arts crowd', as it were.

We will also be at KLPac just before the start of Comedy Court: 10th Anniversorry Show on Saturday night. I have been a fan of Comedy Court for as long as it has existed! Although I have not seen their recent shows, this will be a great time to catch-up.

After the Amcorp sales and buka puasa, we will be at The Attic, Bangsar, from Sunday 8pm. Apparently The Attic Book Club members have chosen it as their Book of the Month :-)

Did a phone interview with Bissme S of The Sun today. I told him that I will be selling the book personally at the Amcorp Mall flea market this Sunday (10am-5pm). He was shocked as he'd never interviewed a writer who would do such a thing: "The rest of them are kinda snobbish, they only do readings at bookshops or book fairs..."

Actually, there are quite a few writers, mainly those who write in Malay, who sell books personally. Their books are often not in the shops but are literally carried around. 'Snobbish' is hardly the word for them.

But I want it both ways: I want it to be in major bookshops, and I also want to push the thing myself, damnit!

So I like the idea of non-bookish venues. By sheer coincidence, the very format of Malaysian Politicians Say the Darndest Things is meant to appeal to non-readers. And non-readers are everywhere!

I am glad that I now have a distributor (MPH) who will stock it at bookshops in Malaysia by this weekend, and then Singapore. (In the meantime, the only place you can get it is here). But it would be so boring to just dump it at the shops and not do anything else. Where's the fun in that?

Maybe it's because I am involved in movies and all, but I do enjoy the vulgarity of promotion. Plus, I get to meet some interesting new folks that way. I was at our launch-day flea market stall for only an hour on Sunday morning, but chatted with the son of a prominent political figure (who expressed cautious support but didn't actually buy the book, the cheapskate).

So, do come to Amcorp Mall this Sunday and we can meet. Shahril Nizam will be there too, with his book If Only.

And I am always on the lookout for alternative venues. I want to sell it at the UMNO General Assembly later in the year. I am told there are many stalls outside. How do I get access to one? (I only hope that not all UMNO members are like Muhammad Muhammad Taib, who cannot read English, or the book won't sell at all!)
Posted by Amir Muhammad at 13:09 7 comments:

I am not sure what I babbled during my speech but I was happy to see so many people. It was a bit of a crush so I must apologise for not having had the time to speak to many.

Special thanks (ahem!) to See Ming and Sek Thim for buying 10 books each. Who needs patrons when you have book-lovers like these?

We have now shifted 426 books by the end of the launch day. The busiest sales venue was the actual launch at The Annexe (188 books), followed by the Amcorp Mall flea market (78), postal pre-sales in Malaysia (62), midnight sale at The Attic Bangsar (22), pre-sales in Singapore (15), the Mont Kiara flea market (13), the Freedom Film Fest last screening (10) and the Selangor Chinese Assembly Hall (8). Another 30 (as the book comes from the printer in packs of 30) I have set aside for the media and complimentary copies to folks such as venue sponsors and proofreaders.

From now on, Matahari Books will always have public book launches rather than those invites-only things. And the next time, there shall be food!

Well, as I'd said earlier, it will not be sold in bookshops. They will instead be sold directly at several venues this coming week. Details will be announced as they become available.

You can now also order it online (from anywhere around the world) at Kinibooks. Do support this virtual bookstore as one third of the price goes to Malaysiakini, a more decent 'newspaper' than our other news organisations that actually use paper.

But the book can no longer be at the launch price of RM20. After factoring in printing costs, the posters and buntings, the space and PA rental, commissions to the sales people at the non-Annexe venues and so on, I find that I am still in the red! But that's OK because I wanted to get it out there first to the people who would most appreciate it.

The following photos are by Nikki Tok. The artwork on the wall is by Hishamuddin Rais (you can read more about the series, in Malay here) except for the first one, which is by Danny Lim.

The others I would need to thank are: Evelyn, Pang, Chung Wei, Lennard Gui, Llewelyn Marsh, Joe Kidd & Saiful Razman. And to Brian Yap and Sharanya for reading.

Do you recognise anyone in the following photos?

Posted by Amir Muhammad at 06:11 No comments:

Posted by Amir Muhammad at 05:36 No comments: