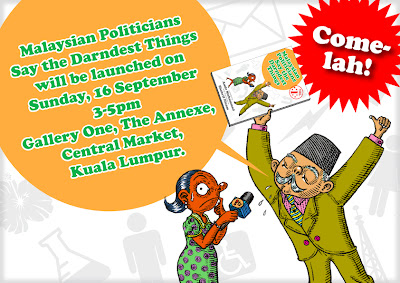 As you may have gathered by now (ahem!) the book Malaysian Politicians Say the Darndest Things will be launched this Sunday, 3-5pm, at Gallery One, The Annexe Central Markket.

You may not know that on that same day, we will also be selling the book at the following venues:

The launch-day price is RM20 because for the first print run of 1,000, I am not going through a distributor. Sales from literally the day after that, in bookstores (assuming bookstores want it!) will be RM30 because I have to share the moolah with others.

As for the Annexe launch itself, there are four bonus features:
* No speeches by VIPs but there will be readings.
* The simultaneous launch of the artist Shahril Nizam’s book If Only.
* Exhibition of Malaysian politicians by Danny Lim and Hishamuddin Rais.
* Gifts for the first 50 buyers.

There will be no food or drinks, not so much because it is Ramadhan but because we can’t afford it. This is a no-frills launch. Besides, unlike most book launches, it is open to everyone.

In the meantime, there are 41 copies still earmarked for postal pre-orders within Malaysia (Maybank2u to 014105120512 and postal address to matahari.books@gmail.com). Orders need to be received by this Thursday night.

Let’s see how many copies we can sell by the end of the launch day ☺
Posted by Amir Muhammad at 11:34

Any plans to sell it down south in S'pore? You got fans here too y'know :)

The Singapore launch will be on the last weekend of October :-)

how about online? am in Australia now, i bet lots of student would love to get their hands on the book.

Interview in Malay by MStar.

We won't be able to sell at KLPac today after all, since we don't have enough volunteers with cars :-(

We couldn't make it to Laundry in time, either, but had good fun selling at The Attic.

But we will be at all the other venues and i would like to 'do' KLPac and Laundry one of these days too...

any place i can buy the book in Shah alam

I just made an order from KiniBooks and it cost me RM30 without the shipping cost.

Thanks :-) It's free delivery if you live in Malaysia, though. You ordered from Singapore, I presume?