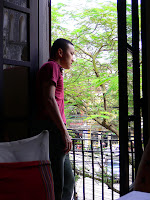 A book I will be publishing early next year is called Weirdest Malaysian News Stories of 2008. I have hired Brian Yap (pic) as editor since, as his piece in New Malaysian Essays 1 proves, he's very good at following the news!

What do I mean by weird? Well, as Louis Armstrong said when asked to define jazz: "If you have to ask, you'll never know."

But here's one from today.

Don't keep your eyes wide shut, and let us know if you come across stuff :-). These are usually not front-page news but in the 'local' or 'national' section, and we are only citing daily newspapers rather than those weekly tabloids.
Posted by Amir Muhammad at 17:02

PLEASE include the news story Pang told me about--the one where the tuition teacher accused of sexually harassig his male student said that his guests, when they jack off in his toilt, end up striking 4D!

He said people who *shower* in his house tend to strike the lottery. Trust Pang to jack it up to jacking off ;-)

No it won't be in, because it happened in December. But it was actually one of several news items that made me want to start this book. I trust 2008 will not disappoint!

I don't know if it is sufficiently weird for your book but the story about the cow thieves earlier this year made the press here in London, forcing me to deny my national identity for a few days. I hope the perps were at least supporting barangan buatan Malaysia and using a Proton. (http://ca.news.yahoo.com/s/capress/080124/koddities/oddity_malaysia_cow_car)