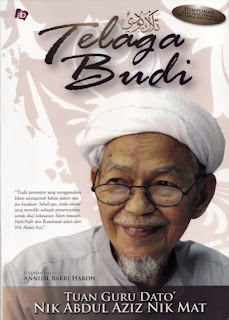 I recently attended a ‘live’ talk by Nik Abdul Aziz Nik Mat, even though there was no by-election in sight. It was on a Kota Bahru street on a Friday morning. He spoke for almost an hour but thousands of people stayed put.

It’s a weekly ritual known as sekolah atas tembok, which in this context translates to mean ‘school on the street’ rather than ‘school on a concrete wall’. He didn’t have to raise his voice; the 78-year old is a skilled orator who makes people want to stay quieter in case they miss something. He made them laugh, make them nod and kept them keen.

I initially thought this book was a collection of speeches by the PAS Spiritual Adviser and Kelantan Chief Minister, but it’s rather different. His actual words consist mainly of 29 things that he has said. Each saying is then placed at the beginning of each chapter as an aphorism; a well of wisdom, as it were, which the editor then draws upon. Some of the homely wit then becomes dissipated in favour of literal explication.

His gift is his ability to talk about politics and religion (and he belongs firmly in the camp of those who do not ostensibly separate between the two) in images that are rooted in everyday lived experience. Take this: “When our wife cooks tomyam, she didn’t create the salt, carrot, chicken, or water; she merely arranges these existing ingredients into a pot.”

This isn’t some sexist attempt to discredit the poor woman’s cooking. It relates to how people must always be conscious that everything around us is on loan from the Creator. And so tomyam gets placed in its theocratic context.

There are few politicians who’ve had not only his staying power but enduring appeal. (Take a look at the upper echelons of, say, the MIC, to see that ‘staying power’ and ‘enduring appeal’ don’t always go together). Although he might shun such a comparison to a Shiite leader, the prevalence of his pictures in Kelantan shops and houses can only be compared to how Khomeini was once used as an emblem of resistance.

The only quote from him that doesn’t get extra explication here starts with: “I am scared of worldly titles like Yang Amat Berhormat (Most Honourable), because in the Afterlife it might become the reverse.” Another example is Yang Amat Arif  (The Most Learned) becoming Yang Amat Bebal (The Most Stupid).

Speaking of ‘worldly titles’: his humble lifestyle is a big reason for his popularity, but there’s something more. Anyone who has been to a boarding school can see how Kelantan Malay guys would always band together and create almost an autonomous entity. It’s not for nothing that the only local film title of recent years to actually reference a State happens to be Budak Kelantan – and this is a state with no cinemas!

This desire to be seen as different also extends to politics. Be that as it may, an interesting creative tension emerges when you realise that, in his speeches and this book, he rejects the idea of communal separation on the basis of ethnicity or locality. Ketuanan Melayu (Malay supremacy), for example, is an assabiyah (tribalist) concept, and contemptible because of that.

What I mean by creative tension is that this universality is consciously articulated in a vernacular that is local (Kelantanese) and proudly so. This isn’t hypocrisy but what the sociologists among us would call ‘local genius.’ More than any other PAS leader at present (the only contender would have been the late Fadzil Noor and, further back in its illustrious past, the more towering figure of Burhanuddin al-Helmy) he has never seemed to be a mere politician, but the embodiment of a certain hope, a certain dignity.

That’s why politicians from the other side of the fence who go and promise to bless the State with ‘development’ seem hilariously off the mark. People there already feel quite blessed, thank you very much!

re: "There are few politicians who’ve had not only his staying power but enduring appeal"

Suggestion (although a tad speechifying): Few are the politicians with his staying power, fewer even with his enduring appeal.