The police seized my book from a bookshop in Melaka. This is the fax. 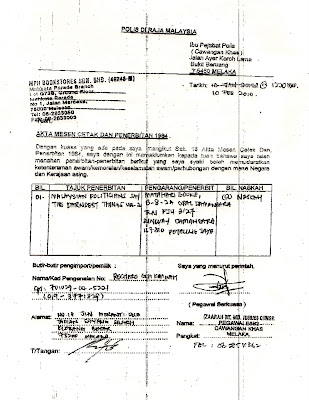 This happened on 10 February but I was only informed by the distributor this morning. All copies of Malaysian Politicians Say the Darndest Things (Vol 2) were seized from MPH Mahkota Parade, Melaka.

I view this seizure as the latest act of harassment by the authorities against bookshops and publishers.

If, indeed, these people suspect that the book (which has been on sale since December 2008 -- yes, for 14 months-- with no hassle) might "have a negative impact on public tranquility/morals/public safety/relations between the country and foreign nations", why can't they just go through the proper channels by banning the book?

The book has many pictures and very little text; even so, did it really take the authorities 14 months to even suspect that the book committed any or all of those vaguely-stated offences? If so, should we worry about the literacy rate of the members of the police force?
Posted by Amir Muhammad at 11:06

I think they just want free copies of the book.

being patience would be the best at this state. besides, it's a part of iman too... ;)

and why is it the police doing the seizing and not enforcement officers from the home ministry?

The police MUST be answerable. These book seizures are utterly arbitrary.

The point is, we all know that the Printing Presses and Publications Act 1984 is a spectre that looms large over book selling and publishing in Malaysia. But, as you've pointed out, these books have already been selling for 14 months. Why seize them now?

The bookstores MUST demand an explanation.

How can ordinary readers help? Lately books I've ordered online have been detained by the Home Ministry (books that have nothing to do with homemade explosives, religion, or the Kama Sutra), and books sent to me from friends abroad have been held up at the Immigration Dept. for more than a month...

Colour me paranoid, but the stink is getting stinkier.

Commiserations, sir. It took them 14 months to find out it existed, eh?
I too wonder why they don't use the law as it exists and not make themselves look so stupid and act like bullies.

('a naskah' is one copy, right? So they shouldn't have taken all, no?)

I blog this story too. Here http://pasalbuku.blogspot.com/2010/02/1malaysia-rampas-buku-lagi-kali-ini.html

can we still order these books online from kinibooks or they will hold up that too?

police.law.politic.it is all about a game in a tiny world..and the people that scare to face the truth.

I wonder why only in Melaka?? Why not other bookstores in Klang Valley? Weird eh.. :)

agreed with shahnon, i saw the book in mph Alamanda Putrajaya last year. There's a bunch of it piled onto another at one corner.

Even me myself stops by and read a few pages, and few pages and actually i read the whole book sitting on the floor.

Abang Amir, i must say that it was quite sarcastic and explicit. But the quotes aren't that provocative so they should get rid of the book but the pics is...errr...how should i say...i lost the word hahahaha

What??? I bought the book last year and nothing goes wrong with it.

this is the fact that "When Democracy is NOT Democratic".. its funny when the Star cartoonist did cynical image and text but nothing is gonna happen to them? i wonder why?

Not just cynical image and text on the cartoon, even the headlines are sometimes provocative. hurmmm perhaps the insiders thing?

Now, you are famous! Can I order an autographed copy ar????

after 14months?and yet they didnt force themselves to seize the previous volume before..apakah


yeah i find the vol 1 at mph alamanda and there's no vol3 neway..so maybe have to wait or order online eh?hmmm

I just bought the book at Popular CentrePoint(CP)-Sabah,last Wednesday! Love it! The book artwork is A+!

Just look on the bright side.The seizure will only make people searching and dig more about the book and its content

I read this book at silverfish. As a Canadian I found it amusing but in no way subversive. Seems like a weak ploy on behalf of narrow-minded and controling government paranoiacs. I am sure this will not deter anyone from seeking this book out and may add to its popularity.

"Where is justice?" and "1 funny malaysia" books by malaysia kini were also seized in Melaka and Negri Sembilan. This two states enforcement seems to be running rampant and uncheck. Is this consider abuse of power?