How to get the remaining copies of the first edition 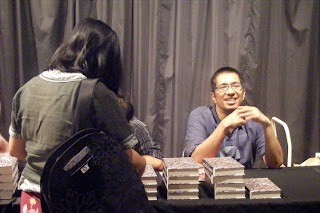 I have 73 copies left of the first edition of 120 Malay Movies. (I had 75 this morning.) If you'd like to order directly from me, fret not! you can still do so.

Email info@mataharibooks.com to order directly from me. Offer valid for Malaysian residents only, alas. Because people overseas have Amazon!

The first edition is also stocked in the following shops (each has fewer than 50 copies):

The second edition, when it eventually comes out, will be more widely available.

Three reviews are now online:
- Farish A. Noor
- The Malaysian Reader
- Ajami Hashim (even though he says he hasn't finished it yet).

I have started writing a new book (it is not cinema-related). Extracts from the first draft will be posted online, on a daily basis, starting Wednesday Monday 16 August. Selamat menyambut bulan Ramadhan, yo!

* photo by Liza Manshoor from the KL launch.
Posted by Amir Muhammad at 16:48

I have a story to tell, how can I tell you?

Blog it and link it?

i don't have a blog, but if you like to hear it do drop me an email..danielteh71@hotmail.com...i hope it could be inspiration for a malaysian made movie..