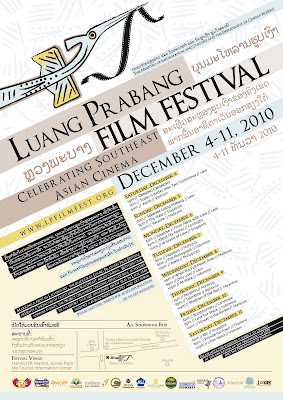 I'm trying not to accept so many film festival invitations (oh, you should hear how some of them beg and beg!), what with me now being a book publisher and all. But I've never been to Laos, so I didn't want to turn this one down. (And it's not just because I'm a fan of the Dr. Siri Paiboun crime novels.)

Luang Prabang itself, a UNESCO World Heritage Site, promises to be a beaut!

Laos has no film industry to speak of but I admire the effort the organisers took to come up with this inaugural, albeit low-key, event. Contrast that with the slapstick dodginess of the well-sponsored Kuala Lumpur International Film Festival (which was supposed to take place this month but just got postponed, apparently). Everyone involved in KLIFF should really be ashamed of themselves -- but since its organisers include a certain Malaysian filmmaker who has a habit of never paying his crew members, I don't suppose they're the kind to embarrass easily.
Posted by Amir Muhammad at 23:13

bang amir! I saw you last night on tv3! hahahaha

so you now you worth another title more, pemikir muda hehehehe

Where can I find the Dr. Siri books?

I got mine from Silverfish, but I also saw em in Borders.