I'm a fan of movie posters, but I have never seen one quite like this 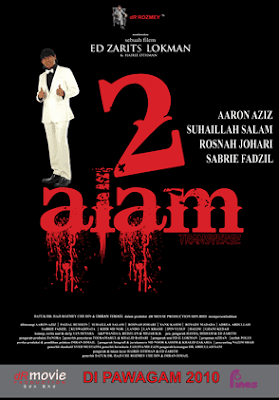 Is this the first movie poster in the history of the universe which features no cast members, but instead TWO pictures of its rather flamboyant producer? (That's also him right at the top, in a chair.)

Well, it's certainly better than the first poster for this movie, which was marred by an unfortunate act of plagiarism.

I have not seen the movie yet and so will not comment.

There will be many people Googling the movie's title and the producer's name in the next few days, to see if he will reach his oft-brayed box-office target. But, blushing little wallflower that I am, I am not gonna mention the title and his name.
Posted by Amir Muhammad at 23:01

Weird...perhaps the producer thinks he is more glamorous than his actors. Anyway it turns me off ehehe

Another example of rich people who think they can make money by underestimate local movie fan mentality.

his doing this for "the industry"... urk!