(Part of my column in TELL magazine about old Malay movies).

Matahari (1951) is significant for being an early Malay movie to deal explicitly with recent history. While most of the Malay cinema that had come before were set in non-specific times and places (and functioned almost like fairy tales) Matahari is set firmly in the Japanese Occupation.

The credit titles (in English) scroll down over an image of the rising (or setting) sun. This is the first instance of many where the sun is invoked. Rather incongruously, the song we hear is a whistling rendition of Rasa Sayang Eh. Was this a popular wartime anthem?

More to the point: How is it that Malayan society back then could deal with a film set in a traumatic time just six years prior? While we in 2008 have never seen a film even of, say, the reformasi of 1998.

You might say that reformasi is politically sensitive and fractuous in a way that the Japanese Occupation was not. You would be wrong, because this film deals with the thorny issues of local collaborators and also guerrilla fighters.

A series of stock footage swiftly defines the time and trauma. Matahari is the heroine, played by Maria Menado before her pontianak days. She is a headman’s daughter. When news of the marauding Japanese reaches the village, it is decided that all the women would be taken to the hills to avoid meeting a fate worse than death.

When the imperialist pigs invade, most of the village refuses to cooperate. An ignoble exception is Umai, played by Salleh Kamil as the kind of roguish villain he would personify. He even tells the Japanese to torture the headman to reveal Matahari’s whereabouts!

The village is a Malay one with one Chinese family. This family meets a worse fate than the rest, which goes with accounts of how the Japanese did treat the locals.

There are harrowing moments of torture and attempted rape. Matahari’s father is killed. What follows is quite remarkable: Matahari heads a guerrilla army! She rallies the rag-tag group: “Let them (the Japanese) kill when the sun rises, and we will retaliate when the sun sets!” 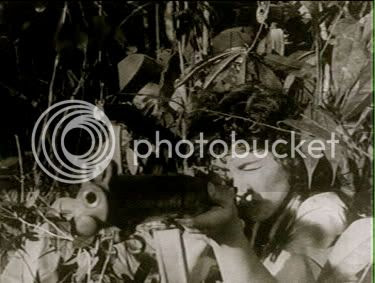 This portrayal of active armed resistance is gutsy and thrilling compared with, say, the titular character of the government-financed Embun five decades later. Even the choice of symbolic name is significant: The dew is no match for the sun! Unlike Embun, Matahari is not gonna sit around and be a victim for long. She will steal rifles and give fiery speeches to incite the masses.

Tellingly, her speeches are anti-Japanese but never anti-British. She refers to the pre-Japanese time as the time of ‘kemerdekaan’, since you could listen to the radio and all. This attitude might be explained by the conservative social mood of 1951 which saw British rule as inevitable. There might even have been British reprisals if a film dared to posit independence to mean freedom from not only the Japanese but the mat salleh.

This quirk aside, the historical figure she would most seem to resemble is Shamsiah Fakeh who was, of course, part of the communists. But Matahari is not allied to a larger political cause; she does not receive instructions from anybody. To an audience of the time, however, the type of anti-Japanese army she led would surely have been identified as leftist if not actually communist – and we are invited to see her as completely correct. Maybe that’s why Matahari isn’t shown often on TV?

This is a swift, rousing film (directed by a Filipino named Ramon Estella) that is not weighed down by the self-importance of Embun. it has a relatively multiracial cast of characters, too, and helped to bring Malay cinema into a more realistic time. Let the sun shine in!

dude, where can I get this movie? Available in DVD in stores near me?

Not DVD but VCD. Not in most stores, but try places like Mydin :-)

Nice! I can remember two other movies dealing with current issues. These movies would be Seruan Merdeka (BS Rajhans) and Mogok (Philipino Director, I forgot the name)
Seruan Merdeka never got sambutan due to it wasn't a studio product. Mogok's director got thrown back to Philipines after the movie was released most probably due to the fact that it was too current and sensitive to the studio.