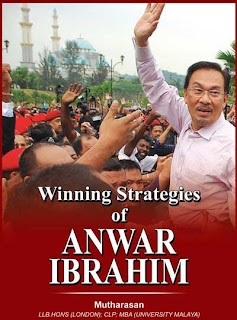 As far as books go, Malaysians love politics and we also love being motivated. Winning Strategies of Anwar Ibrahim puts both ingredients in a pan and stirs gently. The author proudly displays not only his legal but business academic qualifications on the front cover, so we should all feel reassured.

You have read much about what Lim Kit Siang termed the ‘political tsunami’ by now. What this book offers is a very clear hero. Mutharasan attributes the elections results almost exclusively to one man, since Anwar Ibrahim is credited for not only using his strengths but equally shrewdly capitalisng on the weaknesses of his opponents.

Although written and published rather quickly, this is a cut above a sponsored hatchet-job or hagiography. It is not a nudge-wink conspiracy theory, either. In fact, he is so careful about libel that although Altantuya is mentioned, no politician is named as being smeared by her murder. He keeps it civil.

Although he has never met the book’s protagonist and did not conduct any interviews with him, Mutharasan has attended many of his ceramah. Which accounts for the many, many references to Anwar’s dazzling oratorical skills, charisma and, to quote a possible redundancy, “well-known popularity.”

We can readily agree that the very dates of the Elections were most likely set by the government to occur just before Anwar was eligible to stand as candidate. So from the start, the ruling establishment was acting on the defensive. But it seems that in other areas, the author seems to give this charming man a bit too much credit. For starters: a ‘Visiting Professor’ does not actually teach.

Another example: PKR’s decision to field Nurul Izzah as a candidate is hailed as a brilliant strategy to make people see that there is a new generation who will take over the helm. And yet, dynasties in the BN are proof of nepotism. And even after that, when Wan Azizah vacated her seat, this became yet another marvelous tactic to ensure the family does not seem too greedy by hogging three, instead of two, seats.

What is heart-warming, however, is the way in which the Opposition this time worked together much more effectively than in the past. The decision to not come together under a clearly-defined name (unlike in 1999) helped stave off some predictable suspicions that would arise from a Pas-DAP alliance.

The multi-racial character of PKR is also to be credited for firing up the imagination of the young, in ways that the old parties no longer do. (Although this was the first time I came across Goh Cheng Teik’s line: “For a multi-racial party to truly succeed in Malaysia, it must be headed by a Malay!”)

How much of this new-found wisdom can be attributed to Anwar personally? Mutharasan says that Anwar’s 16 years in Barisan Nasional taught him everything he needed to know about how the BN eliminates its foes. And so Anwar is uniquely placed to use this insider info against his former party.

What Mutharasan gets right is that Anwar is probably the first opposition leader we’ve ever had who is serious about taking over the government. This does not mean that a ‘PM in waiting’ should be given a blank cheque, just as an actual PM should not.

This book seems to have been written just before 16 September proved to be a non-event. But the post-election noises about crossovers alarmed even some people who are oppositionists. Such gimmicks surely eroded some of the goodwill that the election results generated. (Mutharasaan never considers that the results were a surprise to the pembangkang).

Above all, aside from his great networking skills (which he started to cultivate as a student), Anwar seems to embody that well-worn motto: If life gives you limau, then make teh O limau ais – as soon as you get hold of the tea and ice, that is.

In this high-stakes game of chess, he has so far emerged victorious. He has anticipated and responded to the opponent’s moves with gusto. But after all this hard work, perhaps it’s time he settled down to being a good Opposition leader for the next few years, and to make sure election pledges are fulfilled. (Local council elections and transparent tenders, anyone?) Heaven and Putrajaya can wait.