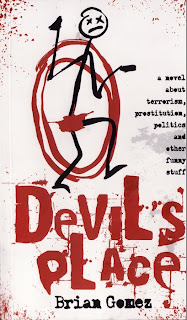 This debut novel made me nostalgic for the time I was young and saw Pulp Fiction on its opening day. The day after that, I went back and saw it again -- twice.

Why did that film excite? It did not contain anything new, but it had the snap and crackle of pure pop. By shoving the ingredients of the crime caper into a post-modern blender, Tarantino invigorated the form. There came the expected rash of imitations, of course, but most of them faded away as quickly as a too-clever smirk.

Devil’s Place (you have to wait until the last line to appreciate the title) is a more linear tale but gives a similar kind of sugar rush. The back-cover synopsis runs for seven paragraphs and will introduce you to all the main characters: a struggling musician on the verge of an unwise marriage, a Thai hooker who bit off more than she could chew, a pimp named Fellatio Lim, a tabloid hack, a JI terrorist, a CIA agent, a corrupt cop, a local version of Mel Gibson’s Conspiracy Theory taxi-driver, guns galore, and a bag stuffed with US$18 million. Save for a brief epilogue section, most of it takes place in much less than a week.

And what a high-octane sequence of days it is. There are murders, jail breaks, shootouts in bars, and even (steel yourself) incompetent renditions of I Will Survive and Smoke on the Water.

Many of the fight or chase scenes have very short paragraphs that breathlessly switch perspectives. It’s like you’re watching a rapidly edited film.

Devil’s Place soars because of the author’s superb sense of pace, and also a certain sweetness that keeps away any humourless macho swagger. It’s not like the more self-serious door-stopping thrillers that are invariably called The Something Something and made into summer blockbusters with frowning male leads.

I have been reading Brian Gomez’s very funny Internet postings for years without knowing who he was. So it’s nice to know than even though he was not a full-time writer, he’s gone ahead and published a novel. Contrast that to the many journalists who are content to merely put out regurgitated opinion columns, and expect us to pay for the damn things!

I shall not give away too much of the plot, but suffice to say that two fictitious Cabinet Ministers (one seen, the other only referred to) are part of the proceedings. And one of them is a really bad guy.

This novel is plainly written by someone who has lived here and observed much; he has been outraged by many things but knows how to laugh. It’s the little touches of comic authenticity that give a thrill: our TV reporters’ way of emphasising the oddest words, the racial composition of Irish bars and (my favourite) the cranky Chinese women who answer the phone when you’re calling for a cab.

There is a healthy, frisky irreverence, but it has an undertow of real smarts. There’s much more profanity than a local novel would normally dare, and certain of our most battered institutions, like the police and the executive, take a further battering. (Not that the CIA or the Arabs would be so thrilled, either.) It’s about time our books stopped being as tame and self-censoring as our movies.

Like last week’s book, Shamini Flint’s Criminal Minds, this is a pacy genre novel that has a lot to say about the society we have become. Who would have thought that our hypocrisy, corruption and enforced social divisions could create such entertaining backdrops? Devil’s Place is the more funny-ha-ha, but it also has the more sobering denouement – no mean feat, this.

Reading these two novels so close together, one of the conclusions I can draw is this: If you want to escape the peninsular without a valid passport, the Thai border is a safer bet than the Singaporean one. You probably knew that already, but you’ll never be told so in such a fun way.

• Devil’s Place will be in bookstores at the end of this month. Brian Gomez blogs at The Floating Turd.

love to go for the launch on the 28th, but I have the critical mass putrajaya on the same day. this guy has a seriously hilarious blog. love his notes of apology to various ppl including god for possible offence in writing the book. No offers for free copies? not one of yours is it?

I am not involved, don't blame me!