Better the diva you know 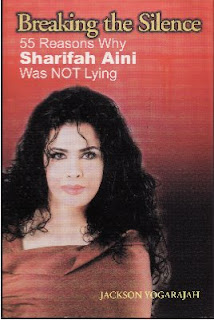 On 14 October 2004, Sharifah Aini was found in a traumatised state outside the TV3 building. She claimed to have been assaulted by men unknown, who also injected her with a liquid similarly unknown. The panic-stricken visage of the chanteuse was splashed all over our tabloids (and don’t get all self-righteous on me –you know very well you are reading a tabloid right now).

Things became curioser and curioser when CCTV footage showed no sign of her alleged assailants. Doctors also failed to locate needle marks or toxins in her. Many journalists and even police officers came to the conclusion that the veteran entertainer was – how does one put it delicately? – a few sequins short of an evening gown.

Jackson Yogarajah proved to be her knight in polyester armour. An expert in body language, he made the news when he announced that she was not lying. This was based on the diva’s TV interview right after the mysterious incident. Her physical movements, speech patterns, rhetorical style – all pointed to a woman who deeply believed what she was saying.

But is “Mr. Jackson”, as the diva calls him (and I know you’re just dying to sing along: “Miss Jackson if you’re nasty!"), an entirely impartial witness? He appears to be a bit of a fan: “Malaysia is blessed with a wonderful gift … She radiates with a fair and honey porcelain complexion. Simply gorgeous! … Anyone is spellbound by her beauty! … Her lush voice transcends generations and genre … People can cry with their mouth open!” And that’s just in the first 10 pages.

Despite the misleading title, Mr. Jackson didn’t write the whole book. A hefty chunk appears to be the lady herself, telling us about her life and amazing career. Her tone is effusive, aggrieved, cajoling, sometimes all at once. Many a time, she sweeps you into her bosomy embrace, and you simply can’t let go. Hapuslah Airmatamu (Dry Your Tears), you want to whisper to her, if only she’d let you speak.

The book is hardly a tell-all. Those of us with too much time on our hands know that she was at that time being accused of defamation for forwarding a nasty email about a younger singer. The younger singer is Siti Nurhaliza, a name nowhere mentioned in this book, although we do get a few gritted-teeth references to “this young lady.”

But Kak Pah insists she’s not jealous of Siti's success; perish the thought! She admires “smart and intelligent female artistes like…” and then proceeds to list down the 18 most famous Malaysian female celebrities who don’t happen to be called Siti Nurhaliza.

She wants to use this book to also correct some of the horrible rumours that have been swirling around her. Did she really once sue her mother? No, she sued a tabloid that had interviewed her mother. Besides, the latter had given her up when she was a baby, anyway, which is why the maternal bond was not so strong. Another pesky rumour she dismisses is the one that had her dissing Saloma during the biduanita’s last days.

My favourite paragraph includes the lines: “I have to say that I have nothing against lesbian reporters … but please, when you are half-drunk and just had a big fight with your partner, do stay away from reviewing any shows as the anger might seep through in your writing!” Are these the only people who have given her concerts bad reviews? But you can’t bear to quibble: she is an institution, we love her songs and besides, we are still stuck in her embrace.

The rest of the book is padded out with fulsome testimonials from her friends, all testifying to her niceness and sanity, including “Sharifah Aini has daringly sported the lion hair look and wore the same strap dress more than 3 times in telecasted TV performances.” So that’s all right then.

Then we are back to Mr. Jackson. The most boring section is the one that lends the book its title, including stuff like “Dishonest people can’t look directly into the camera.” (Oh sir, I could share a few stories there!)

Campy, breathless and eminently quotable, this hefty hardcover retails at RM99 but is a handy thing to have in your car. If any crazy people dare to attack you, you could do a lot worse than hit them over the head with it.

Despite all the controversy..Sharifah Aini to me is still Malaysian number 1 female singer :) aka i prefer her than Siti Nurhalija.

Is "She radiates with a fair and honey porcelain complexion" one of the reasons? If so, damn, I've got to buy this book!

I'm more of a Zaleha Hamid man, myself.

i would like to add for the record that it is absolutely not true that kak pah is an attention-seeker.

it is not true that she once when into a swoon on stage when all the kampung belles only had eyes for d.j. dave when both kak pah and dave were doing a road show together and were sharing the stage.this was some years ago. some many years ago when most of us were slimmer. and swooning would be a less thud-dy event.

ok. and then, and then kak pah went into a 'hysterical' faint, it seems. lepas tu , konon nya all eyes swivelled on to her. tumpuan perhatian semua majlis were on her. she then got the 'attention' she craved. so they said. them that said this are mean-spirited people. there is absolutely no truth to this. it was just the heat and humidity that got to her.

there. so let it be recorded.

I haven't heard her sing or act yet. but Rozita Che Wan is my woman. :)
I hope it is not true that Datuk K might want Siti Nurliza to share him with her.

where is noorshila amin these days?
she could have taken me home anytime she wanted to then, oh those years ago. she did say :
"Kalau ikut rasa hati
Ingin aku bawa pulang"

Go here if you want hear it, here is the music stream

Go sit in your tower of ivory and let evergreen nut-jobs be.

Oopsies, forgive me, your Royal Pedantic Highness, for the grammatical error (the sentence above was written in a state of absolute inebriation.)

"she's a few inches short of a yard."

My guess is Dato' Sharifah Aini has schizophrenia. That's why she's not lying.

aduh! a few sequins short of an evening gown! I haven't laughed as hard for a long time now..LOL

"My guess is Dato' Sharifah Aini has schizophrenia."

And my guess is that you are an irresponsible, dubious jackass with zero qualifications to make that slanderous diagnosis.

Amir, you are HILARIOUS!! I've never laughed so much in my life!! I always thought that she's, er, 'a few sequins short' , but when YOU wrote about it, it makes perfect sense!! Keep it up brother.

Sorry, but I got really cheesed off by the negative assumptions made by you with regard to her state of mind... It is bloody irresponsible and damaging, to say the least...