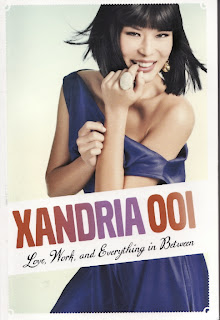 I had no idea who Xandria Ooi was before picking up this book. The back-cover calls her a ‘celebrity’, but an old fogey like myself only tends to notice those who can spin on their heads, like Amber Chia did in the film Possessed.

Almost 400 pages later, I can safely confirm that Ooi wears several colour-coordinated hats in the entertainment/media/PR line. This book compiles her columns from The Star, so she has a sterling ability to keep several balls in the air.

I must quibble with the title, though. She stresses time and again that she loves her work, so surely there’s not much of “everything” that can fit between the two concepts of Love and Work? It’s like that Dorothy Parker line about an actress “running the gamut of emotions from A to B.” (And no, she wasn’t talking about Amber Chia.)

Luckily for us, she can write. I hereby dub her the spiritual heir to Adibah Amin’s Sri Delima columns of the 1970s. There are obvious differences, of course: Adibah didn’t insert many glossy pictures of herself in her books, for one thing (how could she, when she was using a pseudonym?)

There’s also the fact that Adibah was older, and there was a sense of hard-won wisdom. Xandria is only in her mid-20s, so it might gall some people now to take advice (and the tone does get message-y) from someone who wasn’t even around to wonder who shot JR.

She mentions The Secret (which I haven’t read) but the book this reminds me the most of is The Last Lecture. So this is where I had to confront my own prejudice: I’d never heard of Randy Pausch before picking up his book either, and who’s to say that an ang moh professor, even a dead one, can give better insights into life than a Malaysian host?

Like Pausch, Ooi loves her work and places great importance on time management, goals, self-esteem and valuing others. Unlike him, she uses the word karma and also uses spaghetti-straps, but these can be ascribed to cultural differences.

As a creature of the media, she has a disarming awareness about being, as it were, a product. This sets her apart from most first-person female columnists, who assume a harried Everywoman persona.  She cites from management theory (for example, one hapless establishment had “over-promised, under-delivered and had zero service-recovery”) to demonstrate, several times, how businesses that give just a little bit more can stick around longer. It’s not only capitalism with a human face, but making sure that face has enough lip-gloss.

If anything, she appears too sensible; aren’t celebs supposed to be eccentric? But her Confucian work ethic keeps her grounded; even the chapter called “Time to trim down” is about the economy, rather than her diet. 21st century dating isn’t presented in slapstick strokes, but I did appreciate the brusque way she says she and her boyfriend “plan to have children (together or otherwise) in the near future.”

So, in a shiny thimble, the book is about Loving Your Work, and also Working at Love. (I really should be writing press releases).

Ooi can doll herself up when need be but she’s no airhead, and came up with a pithy description of ‘celebrity’ that I can’t better: “when [complete strangers] know my name before I even introduce myself.” I, too, now know – and I believe!

Amber Chia is mentioned twice here! When is Ling Tan going have a book of her supermodel self?