I am presenting one of my fave movies on July 6, talaga!

Not that I have ever done such a thing, but if I were to compile a list of, say, my 20 favourite films of all time, I betcha at least 3 of them will be Filipino. There's Lino Brocka's Insiang. There's Lav Diaz's Batang West Side. And then (this is where you can come in), there's ... 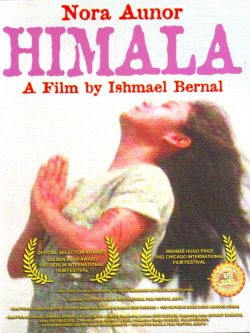 Selected and introduced by Amir Muhammad

Presented by The Annexe Gallery

Admission Free, bring your own snacks

Monday Night Movie is a new series of monthly film screenings at The Annexe Gallery, with titles chosen and introduced by guest curators.

Our first title, chosen by filmmaker/writer/publisher Amir Muhammad, is Himala (“Miracle”, 1982) an award-winning Filipino film directed by the late Philippine National Artist Ishmael Bernal. Based on a 1967 incident and news report, Himala tells the story of Elsa, a barrio lass whose visions of the Virgin Mary changes her life and causes hysteria in a poor, isolated village. The film is centered on the issues of religious faith and faithlessness. The film stars Philippine superstar Nora Aunor in the leading role.

The movie premiered at the 1982 Metro Manila Film Festival, and in 1983, became the first – and so far the only – Filipino film to be included in the "Competition Section" of the prestigious Berlin International Film Festival. Since then, Himala has been exhibited in a number of film festivals around the world. In 2008, Himala won the 2008 CNN Asia Pacific Screen Awards Viewers Choice Award for Best Asia-Pacific Film of all Time.
You can confirm on Facebook :-)
Posted by Amir Muhammad at 14:51

Amir, what do you think of "Foster Child" by Brillante Mendoza? I caught it on Astro recently and was glued to the TV from start to end.

Haven't seen that. But have seen two of his other films, MASAHISTA and SERBIS. Preferred the latter.