Invitation to write one sentence in YASMIN AHMAD'S FILMS 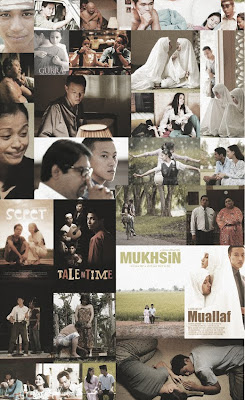 My book Yasmin Ahmad's Films will be available in November. It's my impressions of watching all 6 of her feature-length films, as well as many commercials, in the month of September. It's not an obituary, neither is it a conventional book of film criticism.
We are currently proofreading the manuscript, and it suddenly occurs to me that it would be nice to have the final pages of the book given over to other people's views. People who have watched and been touched, excited, tickled, by the films. (Think of this as the 'viewer's version' of the coda at the end of MUKHSIN).

So I'd like you to have your say! Please write one sentence on any one of her 6 long films:

I think each film will have 1 page, and I will try to cram in as many views as I can. Write about a specific scene, or dialogue, or performance, or the entire film. Write about how it made you feel, or how it related to you, or analyse why it works (or maybe doesn't work) for you.

Some ground rules:
1. The sentence can be in any of the languages used in the films.
2. The sentence should not be more than 20 words. If you are writing in Chinese, then no more than 20 Chinese characters.
3. Send ONLY by email to matahari.books@gmail.com with the heading MY SENTENCE, together with your name and location. Let's make this international!
4. Deadline for submission: 30 September noon (Malaysian time).
5. You can send in more than one sentence, but I will choose one per person.

Due to space constraints, I may not be able to print all the sentences. But here's a hint: try not to pick one of the more 'popular' films, and you might have a better chance lah.

We haven't decided on the retail price of the book yet. But all my writer royalties from the first edition will be donated to the Mercy - Yasmin Ahmad Fund for Children.

A 'teaser' of sorts for the book is my article for the Canadian magazine Cinema Scope here.
Posted by Amir Muhammad at 19:29

i am not a fan of yasmin ahmad yet but 'talentime' made me realize that she is a gem of a director.

Yet there are no 'Muallaf' in stores around Malaysia.

Where can i get to watch Muallaf? Can even get a Malaysian's work in Malaysia..sigh..

The film will be released in Malaysia on 24 December. Spread the word!