Contrary to popular belief, Muallaf was never banned. But this is a line that the censors requested to be muted: 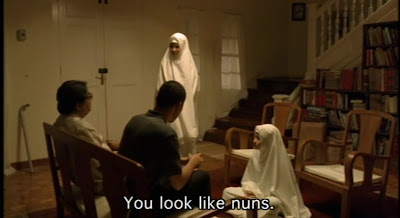 The picture itself won't be cut, but you won't get to hear the line or read the subtitle.

Malaysians will finally get to catch the film when it's released here from 24 December. To celebrate the fact, my 5,100-word chapter on the film will be in the December-January double issue of Off the Edge magazine. It's actually the shortest chapter in the book, because Muallaf is, at 80 minutes, Yasmin's shortest feature.
Posted by Amir Muhammad at 08:32

I have a play out in December that's a tribute to Yasmin's works. It deals with religious conversion too. More details soon!

Oo! If the dates are agreeable I can go watch!

da baca ur book bout yasmin's film...xabes lg...
Muallaf best...
kecewa la jgk...
i watch it last friday...and guess there were only 6 persons watching it...
may be it was xmas...

Orked told me that the other bit that was muted was an azan which had been creatively merged with a piece of Bach, which would have sounded exquisite! I'm only guessing, but I'd imagine Yasmin would have been most upset about that cut ...hopefully if I buy the DVD in Sing it will be still in it!