What a girl wants 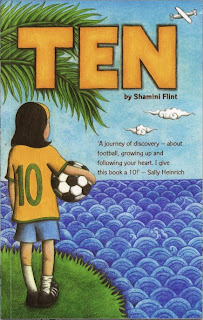 Two weeks ago we spoke of Shamini Flint’s crime novels. Her latest book is about a 10-year old girl who wants to play football – and as this sort of behaviour does not yet have a law, or even fatwa, against it, Ten does not qualify as a crime novel.

Yes, it’s a children’s book! Although it has understandably been a long time since I last touched base with the genre (what do you take me for, some kind of pervert?) this book took me back.

Part of the reason the book took me back is that it is, quite simply, set in the past. I am not a football fan – those games do go on forever, don’t they? – so couldn’t figure out the exact year, but since there were references to Maradona’s skills rather than weight I figured we were talking about the pre-Internet era here. It’s only on the last page that the year is spelled out: 1986.

So, Maya David wants to play football. Trouble is, she’s in a girl’s school – in Kuantan, to boot – which does not have a football team. The very idea seems freaky. Add to this the fact that she’s never kicked a real ball in her life; she’s only had vivid Technicolor fantasies of being on the Brazil team. But she, in the tradition of plucky heroes and heroines everywhere, won’t let these little details get in the way of true glory.

Like all bright people, Maya seems to keep a running commentary in her head. Her wry observations of the way her family and school operate (or don’t operate) keep things bubbly even though there are some darker undercurrents. Bend It Like Beckham got there first and so steals some of its ‘high concept’, but Ten still succeeds as an admirably grounded fantasy.

Maya reads many books, including the Famous Five ones. But the world of children has become more complicated since those Enid Blyton days, and so Ten is not ‘just’ about a girl with a seemingly impossible dream, but about the social forces that swirl around said girl.

For starters, she’s of English and Indian parentage. And since race always matters here, this places her as a minority within a minority. (That’s where all the more interesting contemporary protagonists should come from, anyway.)

Life in school is not made out to seem too brutal; perhaps Shamini did not want to traumatise the intended readers. (Then again, my expectations could be skewed by the fact that, although I don’t read children’s books, I still enjoy women-in-prison movies and have seen dozens. Ah yes, that’s a fine genre that I should write about more someday. Now, where was I? Oh yes…)

Race matters, but Maya – or perhaps, more accurately, the author – is wise enough to see that class plays a bigger role. When a classmate turns up late for school, she notices it’s because the poor girl had to stay up late to help with the family business. These seemingly throwaway observations actually form the heart of the novel’s empathy.

Even though her parents bicker nightly and are seemingly headed for a breakup, football isn’t solely a distraction from family dysfunction. Maya really likes it, as evident from the many football-related similes that pop up in the oddest places. These similes provide much of the humour; another source would be Maya’s gift for noticing exactly how a person, most often an adult, is cringe-worthy.

If we wanted to be political (and since we’re here, why don’t we do just that?) we can say that football, when played well, actually represents a metaphor for how life can be: People are placed where they are because of skill. If the perceptive reader wants to figure out why Malaysia never qualifies for the World Cup, he or she could do worse than study the subtly drawn social divisions that are already at work in our primary school life, as shown in Ten.

There’s a nicely improbable scene near the end in a faraway land, but Maya ends squarely in the place she began. She’s a much better football player by now, of course. And although not everything turned out the way she wanted, you get the feeling she’ll enjoy the rest of the game, even with the occasional yellow card or injury. Ten will be in Malaysian bookstores in a few weeks’ time, so book your seats!

If you saw Offside (which I did, on the big screen), you would know that it's about girls who wanna watch, rather than play, football.

tu lah. i din see Offside. but i saw that movie about monks wanting to watch the World Cup AND play footie.