Sex and the city 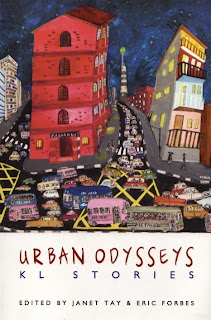 This handsomely produced volume is a good excuse to talk about Malaysian Literature in English (MLE). Like the dragon of Lake Chini, the MLE is a semi-mythical creature that is occasionally discussed but never parades itself in public; it’s not even known whether it has any offspring.

Oh, there have been occasional sightings over the decades. The late Lloyd Fernando edited a few anthologies of local English stories. Then came Skoob Books, Rhino Press and most recently Silverfish -- all eager to prove that the shy monster does exist and is very approachable, and for only a modest fee.

Something sexier is needed. There are many things that can be done with English, either in public or behind closed doors, but our official policy has always made it utilitarian. It’s a dead giveaway that out of all possible subjects to be taught in English, the government chose Science and Mathematics – left-brain, IQ-intensive, upwardly mobile realms. But you can only learn to love a language once it stops being respectable!

Urban Odysseys: KL Stories is the latest attempt (by the private sector, of course) to sex things up. This anthology of mainly fictional stories (with a sprinkling of essays) is set against the city that a French writer almost a century ago dubbed Kuala L’impur – because of our many brothels. The bright lights of the big city still illuminate all kinds of grime and sleaze, so it’s a very good place to start.

It goes without saying (which isn’t gonna stop me from saying it) that any anthology is a mixed bunch. So this collection isn’t as consistently enjoyable as, say, Shih-Li Kow’s Ripples and Other Stories, which you should rush out and get if you have not. The sublime and the boring rub up against one another like so many harried LRT passengers – but the journey’s the thing!

KL is mainly a Cantonese-speaking city with most signs in Malay, so where does English fit in? There’s a small typo on the lucky page 88, where teh tarik becomes the tarik. I draw your attention to it not out of schadenfreude (God knows the books I publish have enough typos) but it’s oddly troubling that such an iconic local beverage tends to get automatically ‘corrected’ (into a mistake) each time you type it on a computer. Does our local reality resist being rendered in English?

It doesn’t have to, as long as the writer has a good ear. The best stories in here burst with life, while the worst merely pile on details without the benefit of a pulse, and just don’t sound right. Malaysians spend more time talking than thinking (oh, listen to me!) so if the dialogue is off, the rest of the story often collapses, and I don’t care how eloquent those interior monologues are.

I’d like to concentrate on my three favourite stories here. If you’re a cheapskate you might want to read them for free at the bookstore, but the crafty editors chose relatively long stories (average length: 15 pages) and besides, what makes you so sure we have the same taste?

Preeta Samarasan’s Rukun Tetangga starts in a shopping mall – which, as a KL story, already sounds so right. We follow a conscientious but lightly eccentric man as he seeks to rid the city of those nasty kidnappers of children he has been reading about. We are totally in his power-walking shoes throughout, and it looks like it will all end horribly for him – and in a subtle way it does, but not in the way we had expected. It’s an acute, affectionate but quietly devastating snapshot of human values in the age of surveillance.

Ho Sui Jim’s Bentong delightfully reminded me of the opening chapter of Haruki Murakami’s The Wind-Up Bird Chronicle. Instead of pasta, it’s mutton curry that’s being cooked. And it’s the cook’s husband that’s missing, not a cat. A rambunctious comedy that I wanted to go on forever, and the scene in Puduraya (horrors!) is a particularly pitch-perfect treat.

It was only when I read the biographical notes at the end that I realised all three of those writers live overseas! What gives? But perhaps we shouldn’t get all worked up about that; KL, like many cities, treats transience as a constant. And we should be happy there was a muddy confluence that enabled the stories in this book to come together in this way, to make us stop and see things anew – at least until we are taken at the next flood.

Thanks for the review! Glad you liked it. And I agree with you -- maths. and science in English will never make people fall in love with the language, or do anything original (or uniquely Malaysian) with it.

I nvr realized the six o'clock Chinese serial melodrama LOL. Well I thk u very much for the positive review (I think), Amir. Am very honoured.