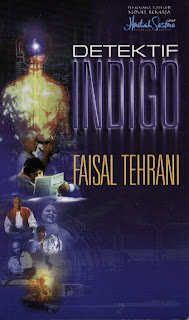 The author of last week’s Tuhan Manusia has written many other novels throughout his career. In fact, he’s been winning prizes since he was a teenager, the lucky thing.

His earlier books Cinta Hari-Hari Rusuhan and Perempuan Politikus Melayu were, by his own reckoning, substantively different from his recent output. Although similarly concerned with social justice, they were in a more populist form. But he has since disowned such a ‘secular’ format and now writes from a theologically censorious perspective.

A good illustration of this epistemic shift can be found by contrasting his sensuous appreciation of Yasmin Ahmad’s film Rabun (2003) against his shrill attack on the same director’s Gubra (2007).

Some of his latter books, such as 1515, can be described as Occidental re-imaginings of the Malay-Muslim world’s encounters with the West. Others, such as Bila Tuhan Berbicara, adopted radically different forms (in this case, a theatrical format, the least playful play you will ever read) all the better to cram in as much pious didacticism as space permits.

You’d have to be privy to contemporary Islamist discourse here to appreciate that he isn’t your garden-variety conservative, however. He has written much about the need to be sympathetically inclusive when it comes to Shi’ite beliefs (Tehrani itself is a pen-name) and this has been enough to brand him some kind of deviant. It’s a measure of Malay-Muslim complacency that no one wants to question why the Shi’ite belief is still banned in Malaysia, despite the fact that Iran is probably the most intellectually and scientifically progressive state in that region.

But is it all heavy-going? Faisal is not even 35 yet; surely he’s capable of fun? Well, here’s his lighter mode: a children’s book! Detektif Indigo reminded me a bit of the Alfred Hitchcock Presents series, although a character in it does made a reference to JK Rowling’s enduring creation. To be precise, Harry Potter is referred to as “si ahli sihir bodoh”.

The Indigo Detectives are students at a top-secret academy for super-bright Muslims. They not only have high IQs, some have psychic powers or are gifted in endeavours such as music. (See kids, music isn’t haram, but one must make sure one’s music exists to increase devotion to God, rather than to shake one’s booty.) No wonder a non-religious boy-wizard seems stupid in comparison.

When I read the back-cover synopsis and saw names like Cheng-Chung and Izamu, I thought that this book would feature some non-Muslim protagonists, for a change. The joke’s on me: both are not only Muslims, but very good ones too. It’s the author’s way of making sure Islam is always bigger than Malayness, although local right-wing political demagoguery would conflate the two.

But the fact that this academy only has Muslim teachers (of all races, natch) does make one wonder: would non-Muslim staff seem contaminating? We all groaned at the Ali, Ah Chong and Ramasamy of primary school text-books, but won’t their world have seemed much blander if they had only one religion among them?

Take the case of the fat girl Mihrimah. Her corpulence could easily have triggered an authorial sermon on the dangers of greed and sloth, but her tubbiness is taken as cute. But even this chub has a religiously self-righteous side. She actually tells a non-Muslim doctor that the latter should “menemukan agama yang betul dan akidah yang suci.” And this is someone she just met! If I were Dr. Nancy, I’d slap the sanctimonious tubbo enough to make her chins wobble.

And when it turns out Izamu knows how to make a bomb, his joking explanation is that Muslims have been victims for so long, it’s time they (or we) learned to fight back. At least, I hope he’s joking; I don’t hear enough Japanese Muslim humour to know for sure.

One of the signs of an indigo child (the term actually originates from New Age types in the West) is rebellion towards authority. But the 12-year olds here never question the point of anti-khalwat patrols in their midst, so I suppose some forms of rebellion are more kosher than others.

The novel mixes Islamist revivalism with wishful thinking. The academy is shaped like a pentagon (read: Pentagon) but with a mosque at its centre, which says it all. This is a world where the Organisation of Islamic Countries is efficient enough to fund an academic institution and keep it a secret from everybody else, and where the Malaysian Prime Minister doesn’t shake women’s hands.

But it clips along at a fast pace, and is actually fun. It’s like eating a bowl of cendol that contains a few bits of incongruous gristle – but the Jews among us can rest easy: it’s made from beef bacon.

Dear Mr Amir,
I am in need of your assistence regarding Chin Peng.
Please reply me via e-mail at enderxanatos17@hotmail.com.
Your help would be most appriciated. Thank you and i Hope to hear from you soon.

I emailed you and it bounced back.