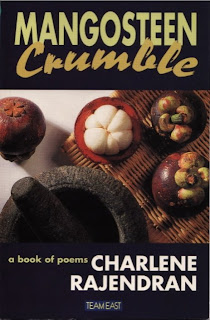 First, the bad news: Mangosteen Crumble is out of print. You can’t get it for love or money in any bookshop here. Since this is one of the most interesting local poetry collections I have come across, the news is a crying shame.

And now the good news (you knew I wouldn’t let you down): I am making the entire book available again. The poems will be uploaded at the rate of one per day, starting today. So you can have the words with lunch.

I do have the writer’s permission. But even if I didn’t, I wonder if she would object, seeing as how piracy has been such a valuable teacher to us. Charlene is a teacher as well, but not one of those stuffy by-the-rules ones. She can be a bit of a joker, but a serious joker nonetheless.

There is no such dish as mangosteen crumble, but the title poem asks us to imagine such a thing. It sounds like it could work: the tart sourness of the fruit, the harder crumbly pastry, all topped off with the cool sweetness of cream.

It’s also a metaphor for cross-cultural connections, but it’s the very best kind of metaphor, because you can eat it! Even if you become fat, your chunkiness itself becomes a metaphor for consumerist excess, so we’re fine even with that.

Charlene also appears to be a fan of rojak: words that are not considered English are used without italics. The point is that nothing should ever seem foreign to us, if only we open our hearts.

The rojak point has often been made of Malaysia, of course. But unlike, say, California (which has a bigger ethnic variety) our smorgasbord of difference is presented as a selling point when we feel like it but also used to justify oppression in other times. What gives?

This book is divided into four sections. The first, “Rasam Concoctions” and third, “Teh Tarik Tempo,” are the ones that dance the most to different simultaneous drums. The Malaysian sensorium is brought to bear: smell it and see! And if you like it, you can always lick it.

This isn’t some witless tourist pamphlet. You can bite things, but things will also bite you back. Bringing together different icons –temples rubbing up against mosques – is meant as both nourishment and polemic. There are also poems that critique our other ‘culture’ of packaging everything into boxes, complete with price-tags.

The words are limber and easy, but always in search of ironies and telling details, and always questioning. Such as: when flags are raised so high, don’t they become impossible for those with “feet on the ground” to grasp it?

The second section, “Squashed Rojak Packet”, presents a dark view of family romance, and of the ties that (as a comedian once put it) both bind and gag. This section tends not to get mentioned much in the few reviews that have appeared, but it’s a fascinating counterpoint to the more playful celebrations. You can’t taste the sweet if you don’t know what bitter is.

The final section, “Sothy and Strings”, is the most ambitious. It presents two different scenarios: the Japanese Occupation and strife in Sri Lanka, but through very ground-level gazes: a Malayan child, and a Malaysian visitor who has Ceylonese roots, respectively.

Even more than the anthology Urban Odysseys (2009), this slim but memorable book is important for creating an English with the rhythms of home. Now that you can read it for yourself, it can once again hit where the heart is.

* Do start reading the book today at
http://mangosteen-crumble.blogspot.com/
Posted by Amir Muhammad at 11:58

what a shame you italicised 'rojak' in your review. :)

Thanks, Amir, for making the book available to us! Any plans to print a regular book version?

Chet! I donch print poetry books. But if you come to the launch, I will have a surprise for you ;-)

KG: newspaper house style la. But I never use honorifics (Tun, Dato) but the paper sometimes adds those.

Here's a piece she wrote for the New Kyoto Review of South East Asia on Krishen Jit and Five Arts Centre.

Thank you so much for doing this! I'm looking forward to discovering these poems. I'm already a fan just for this (my own credo as well, although the editors of Urban Odysseys chose to italicise non-English words):

words that are not considered English are used without italics. The point is that nothing should ever seem foreign to us, if only we open our hearts.