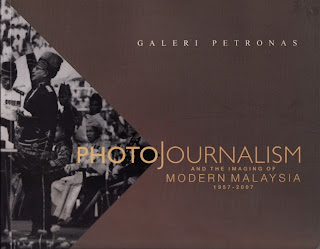 This book doesn’t have to say much: the pictures do all the talking.

Khoo Kay Kim in one of several Introductions corrects the popular maxim about a picture being worth a thousand words. He said the actual Chinese expression is “a picture’s meaning can express 10,000 words.” (Trust the Chinese to always want to do things on a bigger scale!)

Unlike studio portraits where the emphasis is on the technique of the photographer – and often the vanity of the subject, as witness the perennially youthful politicians on election banners – the photojournalist has to also bank on instinct and sheer luck.

This is the printed version of an exhibition that the Petronas Gallery held, curated by Eddin Khoo. The younger Khoo provided the captions and chronology, and his often terse prose wonderfully leaves imaginary spaces for us.

There are 100 photos, one per page, but the identity of the photographer is often unknown. This anonymity is a shame for future scholars of the field, but it’s also curiously apposite because many of the photos here aren’t of ‘named’ people but the average Joe (be it Joe Sidek, Joe Chin or Joe Maniam) on the street, and how he becomes unwitting witness to the events of the time.

Take the sole reference to the May 13 riots. It comes in a photo taken two days later, with the caption: “Returning home with food before the imposition of curfew.” We don’t see any politicians, just a multi-racial group rebuilding their lives.

Pluralism is further enforced and celebrated in other captions, often through deliberate omission. Just one word, “Thaipusam”, is needed for a Batu Caves crowd, “Congregation” for a mosque, and “Sisters” for nuns at a vigil. No need to explain what the various religions are: these are all Malaysian sights and rituals.

The arrangement is mostly chronological but sometimes breaks out to witty effect. The Highland Towers collapse is juxtaposed against the construction of the KLCC, and the combination says much about our national priorities. (The fact that the book was funded by the corporation that built the KLCC adds a piquant layer that I thoroughly approve of: it’s always fun and necessary to bite the hands that feed you.)

There’s also a wedding in the haze (replete with face-masks) right next to a group of Anwar Ibrahim supporters enthusiastically greeting him after his sacking. The poisonous political smog that was choking us at the time finds a great, local visual metaphor.

Speaking of politics: One of the longest captions here describes an Umno Youth rally at the TPCA stadium “to support a government proposal that non-Chinese educated teachers be appointed as administrators in national type Chinese schools” in 1987.

Even then, the info is deliberately curt. We’re not told about Operation Lalang, where the government (or more accurately, Team A of Umno) nabbed over 100 of its critics. So a person who doesn’t know the background might ask: Why on earth would Umno Youth care about Chinese education? But it’s by stripping the issue to its core that we see the ethnic chest-thumping on display as the bathetic parade that it is.

We also literally see how our politics had degenerated from the 1950s, when all the pictures were of positive enthusiasm and where any uncertainty (the Tunku crossing a narrow wooden bridge; a delegation waving off the departing English, whose plane we don’t see) marks a challenge rather than a threat.

Only the final images are in colour. Semiotically, colour can represent optimism. But the seamless organisation, towards the end, of a beaming Nicol David, a beaming Pak Lah, the Kampung Berembang demolition, and Kota Tinggi floods says that the Malaysian drama is not yet over.

hey amir....i want to give an idea for your next book (msian politicians say the darndest things vol3)....

Taib said: “I’m already old and I don’t work for money … and you will notice in most of my speeches I don’t talk about money like the spending of the government.”- Quote from BorneoPost

Sarawak CM on..... ''Taib reminds civil servants to go for job satisfaction and not to equate monetary reward with success''

Hi Amir,
great review.
do u think I can post this review on ARTERI? :)
http://www.arterimalaysia.com

i love the idea of the last picture from the book!

wow.. i really wish i had picked this book up in Malaysia when I was there in 2010.... is it still available? terima kasih Amir!