Tourists and other animals 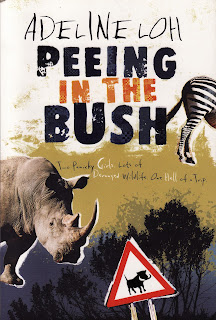 I never knew that hippos were the deadliest animals in the world (after you discount those nasty mosquitoes). Deadliest to humans, that is: 200 of us are killed by those beasts every year.

Luckily for us, Adeline Loh did not become a gruesome statistic. Although she does entertain many premonitions of gristly death by means of mammal, reptile and man-made vehicle, she survived her one-month adventure holiday in Southern Africa to deliver this chortling account.

I don’t read many travel books, but this has got to be one of the funniest around. The comedy comes from her cheerfully irreverent approach to life. She has a sidekick, too: Chan, a much more cautious woman (a vegetarian, to boot), whose restraint acts as counterpoint to Loh’s desire to try everything at least once.

Loh’s special gift is comic similes. Her overstuffed knapsack made her “bend over like a 90-year old with a hernia,” while Chan’s standard garb of scarf and sunglasses made her like “like she was secretly trailing her adulterous husband.” Bathos also stops the book from sliding into the kind of sonorous voice-over that you get from travel documentaries; for example, standing by the great Victoria Falls is like “being showered upon by a permanently depressed giant aerosol can.”

The descriptions of animals and their anthropomorphic peccadilloes are another highlight, although I still don’t think I can tell an impala from a puku. My favourite is the endangered white rhino who refused to develop an Oedipus complex.

It isn’t all funny ha-ha. Zambia is one of the 12 poorest nations in the world, and more than 15% of its population has HIV. (But almost everyone speaks English, so you wonder where our own government got the idea that this language is somehow a prerequisite to la dolce vita.) The tone doesn’t shift jarringly to the deadeningly solemn when she discusses the sadder side of life there, but the lingering lightness is more honest, and more indicative of the human resilience she sees around her.

Does tourism encourage empathy or distance? Are there discomforting similarities to colonialism? For example, Victoria Falls itself existed and was known to natives of the area long before Dr. Livingstone “discovered” it and named it after his queen, an irony Loh is aware of. Most of the locals she encounters are trying, in one way or another, to get some money from her, so that presents a necessarily distorted sample.

At the end of the day, this book is less ‘about’ Zambia than about an assorted menagerie that any tourist will not only encounter but become part of. The animal kingdom is varied enough; there are also the shifty guides, the would-be Lotharios, the reckless drivers, but also people from faraway countries who feel the inexplicable need to ‘find’ themselves by, well, getting lost. Perhaps the latter group is the weirdest of all, but everyone exists in mutual, and mostly agreeable, dependence.

Hence the emphasis on toilet functions, evident right in the title. At the end of the day, all of us, whether from the First, Third or ‘developing’ world, need a place to pee. And when there’s nowhere more convenient, the bushes that have served our animal cousins will do the same for us.

It’s a bawdy, democratic vision but the book stays clear of overt political correctness by broad, often nationalistic, caricatures: when they are at their most disheveled, the two women feel like “Indonesian housemaids” when lining up for food with an atypically smart urban crowd. (I winced at that, I must admit. But at least she, unlike most of us, thinks that these women deserve a day off to eat outside in the first place!)

Driving back from KLIA, her senses seem permanently changed – at least, until the next adventure. Wherever and whenever that will be, I want to be in for the ride.

I'm from Venezuela. I'm visiting Malaysia for about a year and i'm already in love with your country.

Where can i get your films?