A prince among men 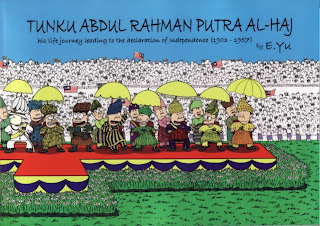 Last week’s novel, The Malayan Trilogy, ended at Independence but gave us the sardonic sweep of our incipient nation’s colours and contradictions. It did not foreground any politicians, so this oversight (if it can be considered one) is happily corrected in this comic tome.

This is a longer and more satisfying book than E Yu’s previous biography of Dr. Mahathir. It’s still in the genre of hagiography rather than critical biography, but it’s more diverting since there are more incidents here that aren’t common knowledge to the average reader of today. The cute tone is also more apposite, since the Tunku exists in the public imagination as a much cuddlier figure than the famously combative doctor.

The Tunku was an affable old-school gentleman whose Anglophilia and royal credentials were matched by humour and cosmopolitan ease. (This is where we are conditioned to sigh: “They don’t make ‘em like that anymore!”) To use the title of a biography about someone else, he was also a ‘reluctant politician’ whose conciliatory personality nevertheless shaped the first few decades of the country.

Not exactly the towering paragon that a more rabidly ‘nationalist’ writer would invent, the prince of Kedah is shown as a less-than-stellar Law student who would sometimes get bullied at work, and whose second marriage ended in failure. Even the Preface by his son acknowledged that the Tunku “was not much of a family man.”

But it was his infectious joviality that inspired people. Unlike UMNO founder Onn Jaafar (presented here as antagonist), he wasn’t even a sterling orator, but his royal status was the starting (but not ending) point for garnering supporters.

Speaking of which: Malaysia would be very different now if Onn Jaafar’s proposal to open up the party to non-Malays hadn’t gone down like a ton of bricks. We probably wouldn’t still be wasting time arguing about ethnicity when there are more pressing matters. We won’t need 1Malaysia if the concept were already a fait accompli. Things always seem easy to fix in hindsight, but it’s doubly sad that the Tunku ended his years in yet another party, Semangat 46, that was defined primarily by race. Did he really feel we had not moved on?

The birth of any nation is always a contested terrain and any account is bound to displease some people. On the plus point, it’s great that this book highlights the fact that our royalty was never an apolitical institution: the sultans were ready to agree to the entrenched colonial plan of the Malayan Union, and were also hesitant about Independence lest they lose their powers. The relatively chummy terms by which Independence was granted is also not ignored in favour of breast-beating perjuangan rhetoric. And unlike the film 1957 Hati Malaya, it even includes Chin Peng and the Baling Talks!

But the crucial role of women in UMNO is neglected, as well as the neighbouring freedom movements of Indonesia. If the latter didn’t have any impact, then why would Indonesia and UMNO have almost the same flag?

Like E. Yu’s Mahathir bio, this has a host of slapstick commentators, human and non-human, tucked away in corners of the frame. My favourite is the “hairy porter” who’s offering his services.

The most moving section is his first wife’s death through medical malpractice; it is shown as typical of his selflessness that he did not press charges. And the most exciting is when he ‘kidnapped’ his father during the Japanese Occupation, and in the process saved the aged sultan’s life.

Towards the end, we get the national anthem. The fact that Negaraku uses the melody of an Indonesian love song (which was also adapted into a Hawaiian pop tune) speaks of the exciting fluidity that existed at the time. Only a playboy prince would have been unstuffy enough to choose it; a more insecure arriviste would have insisted on something more pompous.

To provide a more rounded picture of the forces at work then, this should be read alongside another illustrated book, Where Monsoons Meet, which unabashedly took the Leftists as heroes. Some people will say that both combined still don’t make a ‘complete’ picture, but only extinct people have complete histories.

So here we are, squabbling often about the same trite themes. I’d like to think the Tunku is now sitting somewhere, nursing a favourite drink, sighing with some exasperation, but pleased to be away from it all. Cheers!

I love your line: "only extinct people have complete histories".

i brought the book. cant stop reading it when i started it...
it really shows us how much efford he put on for our people in Malaysia