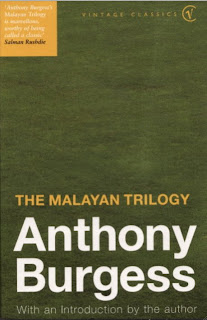 I would rate this as my favourite Malaysian novel, even though it was written by a mat salleh before Malaysia came into existence in 1963. But Anthony Burgess was no ordinary mat salleh: a polymath who never seemed to try too hard, he spent six years of his life here and left behind this novel; lucky us.

For starters, there’s the wide range of characters, of every possible Peninsular ethnicity. It’s the most vibrant depiction yet of our Truly Asian but multi-racist society. The jokey, pomposity-puncturing allusions to local mores and hypocrisies have not gone stale. Even the Malay names of places are often rude, which is something that the average English reader wouldn’t have possibly realised when reading it; so it’s like a gift to us.

This novel has not proved popular among humourless local academics, who find it patronising. What they willfully ignore is that the depiction of the whites here is often more scathing, with enough booze and adultery to keep any daytime soap-opera going for months.

The first book takes place in a state modeled after Perak, where Burgess did indeed teach (at the venerable MCKK); the second is in a disguised Kelantan; while the third is in a state that doesn’t even have a fictitious name. In a novel where names are often meant to be taken ironically, the protagonist Victor Crabbe doesn’t end up victorious. And the very first man we meet, an alcoholic policeman named Nabby Adams, is also ‘expelled’ from this warm Eden by the end of the first book.

Burgess represents varied Malayan voices with a musician’s ear, a humourist’s lightness of touch, and a wounded idealist’s moral rigour. Many of the jokes come from racial caricatures that we can recognise from our daily conversations and from cruder subsequent works.

When Crabbe the teacher says to his multiracial class, “Man was not born to work”, the author follows this with: “All the Malays nodded.” The throaty “A?” is described as “a noise which God gave only to the Chinese lower classes.” To round up this muhibbah triumvirate, we learn that “with Indians there is an unhealthy love of the law”, as seen in court through “wailings, rendings of shirts already rent, flashing eyes and poetry, babies exhibited theatrically at moments of crisis.”

Take just one small episode: an elderly Chinese cook is seen chasing a Malay servant girl. He’s actually after her cat (to be eaten), but a small angry mob gathers because he’s suspected of trying to molest her. So here we have comparative gastronomy, a ribald pun (she’s trying to save her puss), slapstick misunderstanding and opportunistic racial grandstanding.

I don’t mean to grant Burgess any divine mythic powers, but it’s amazing how eerily prescient the book is. For example, there‘s a deathbed controversy of the theological nature, which could have been wrenched straight from today’s headlines. But although the mood grows darker (along with Crabbe’s) as Merdeka approaches, there’s still a heedless optimism in the portrayal of how the younger generation chooses to bond.

Witness the budding friendship between Syed Hassan (who would in today’s vernacular be a mat rempit) and the music prodigy Robert Loo (who is thought by the town to be a ‘catamite’ – a word I learned from a different Burgess book). It’s inexplicable, it goes against ingrained prejudices, but it feels apposite.

And that’s why the world depicted in this novel will rumble on, almost in spite of ourselves. It’s this ‘tidak apa’ (a phrase he uses often) resilience that some of our more exasperated public intellectuals, for example, simply never ‘get’.

The Malayan Trilogy is a rambunctious and colourful performance of heat and lust, with the comic bathos of downpours always on hand to quench any potential high-mindedness. It should be made a compulsory text at school, as long as the teachers aren’t prudes who will latah at the lewd words.

is this book still in print? kinokuniya?

Anthony Burgess sound like the name of author for Clockwork Orange novel. :P

That's probably because it's the same person ;-)

Great review Amir... I myself picked this book up by chance at the airport, while waiting to board a flight to Australia.

Needless to say, it was a sleepless flight as I was simply enchanted by the storyline and the whole environment created by Burgess.