Something that happened on the way down from the Christ

The famous Christ the Redeemer that overlooks Rio de Janeiro was somewhat smaller than I had expected. (But then again, this is true of all the iconic structures I was introduced to first in pictures, such as the Statue of Liberty, the Eiffel Tower or the Kaabah.) But it is undergoing extensive renovation, which makes the statue more interesting. The main point of the trip up the mountain, however, was the spectacular view of the city at magic hour, as well as the invisible line of the Atlantic sprawl meeting the sky. My mobile phone camera won't do any of that justice, so I will leave you with the statue instead: 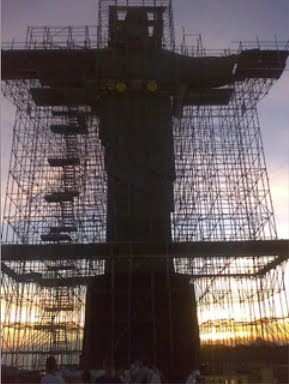 On the way down the Corvocado mountain, the train (which was the last of the day; it was almost 7pm and dark) shuddered to an unscheduled halt. We were surrounded only by jungle, but the train was packed with people, mostly Brazilian. And this is what happened: complete strangers started ... talking to one another. People turned around in their seats, got up, gestured to those a few rows back to include them. Within five minutes, the carriage was rocking with the sound of conversation and laughter. I don't know what they were talking about but no one seemed to be complaining about the delay, at least not in a sour way. I think this was the positive energy that caused the train to then start moving again.

If they had done what a different sort of crowd, in a different country, would have done (groan, whine, flip out their handphones, connect iPods to their ears, avoid looking at others, pretend to sleep), the train would have been stuck longer. And it would have felt that way, too.
Posted by Amir Muhammad at 21:07

I think the friendly atmosphere was also inspired by the Person whose statue they'd just visited.

Unheard of in KL!

positive carmaderie even in a foreign language is always nice

umm, so should i or shouldnt i get that iphone and ipad? ;)

i think the poster kind of inspiring me in a , say bad way u know.

means when i look at the orang putih pic and wonder why no local kids there. it just makes me wanna go there and buy books....

it challenge me. so the poster works in that way i think