(I was asked to ulas the book Sultan Pun Blog on stage at its launch this evening. But I decided to read this out instead. Much of what passes for Malaysian pop culture is excruciatingly banal, but credit must be given to Sultan Muzaffar for being one of the earliest -- and still one of the most popular -- entertainment bloggers in the nation. I believe that his original impulse, or throb, must have been of love. Syabas!) 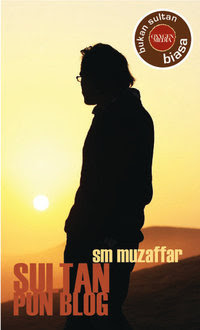 We're here to sambut the book by SM

Although near the new Istana Negara

According to pakar bidang seksologis

He knows spanking is part of asmara

SM and pop ditakdirkan go together

They are toast with kaya AND butter

But I can't watch Akademi Fantasia

I find it more fun to listen to Perkasa

Despite kesesakan lalulintas of KL

He will not miss P. Ramlee or PGL

Watching a play lima kali is no hal

It's an addiction, but it is still halal

He has two chapters on filem Sepet

But doesn't include any filem rempit

We all sedia maklum Siti's majesty

But he should explain rahsia Mawi

He can sing praises of seronok gila

When writing of Cinta dan Rangga

But menyumpah with funny vitriol

If we want to be gila babinya honest

Our pop culture bukanlah the mostest

Too many folk want to play safe only

Budaya is not just films, song or stage

It is also how kita PILIH untuk engage

Sultanmuzaffar is a pelopor bloggerati

He helped kembangkan our vocabulary

Then again, some politikus are bonkers

Feed these guys to a flying pontianak

hoho! a cute one!
its sad i couldnt come!

If you think 'ulas' means 'puji', then your Malay must be pretty crap.