First Malay actor in a Hollywood movie. From THE SPIRAL ROAD (1962)

Ibrahim Pendek (1932-2003) was in over 30 movies. The best of them, like Ali Baba Bujang Lapok, Hantu Jerangkung, and Anakku Sazali never made a big deal about his height :-)

When I saw him at a Finas function sometime in the 1990s, he was still very happy to talk about the month he spent in Hollywood, and it's not just because of the annual royalty cheques he got. 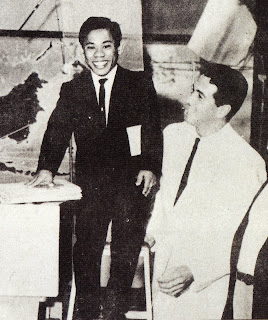 Three other points of interest:

1. As this film was shot in LA, did the rest of the team know what he was saying in his Malay dialogue? It's not subtitled, and is therefore meant to sound 'nonsensical' to its target audience.

2. The reason for Rock Hudson not being interested in a pretty woman is now quite clear, in retrospect.

3. He's not the only actor in the book to have a self-explanatory stage name. There's also Zainal Gemok.
Posted by Amir Muhammad at 08:57

Erm, it's well-established that it was not just a rumour.

interestingly, just listened to larry king being interviewed by donald trump. and there was judge judy asking larry who his least favorite interview was.

larry answered it was rock hudson's wife. she came on the show soon after his death and apparently was a terrible interviewee. Giving bland short answers. when everybody was expecting fierce sordid revelations. i was unable to google anything on her. RH's wiki entry does mentioned his marriage.

She was Phyllis Gates.

ibrahim was cute in there,

This is so interesting! To know the first Malay actor in a Hollywood movie, and with Rock Hudson too.

BTW, who's the 'pretty' girl in the movie? Did she understand what he said in Malay?? :D