Woman of the left 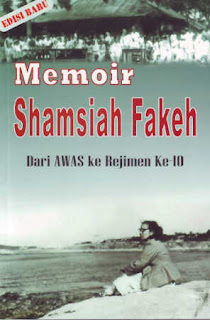 Shamsiah Fakeh’s memoirs were first published in 2004 but then withdrawn from circulation. It was not officially banned, but in Malaysia things do not have to be official to work. Pressure was exerted by the Information Ministry (then headed by the quotable Zainuddin Maidin) on the publisher Universiti Kebangsaan Malaysia –and before you can say ‘goblok’, the book could no longer be found, even for ready money.

Why the fuss? Well, Shamsiah is an iconic figure of the Malay Left. Her very presence complicates the idea that the pro-Independence movement was such a simple affair.

She led Angkatan Wanita Sedar (with the cool acronym AWAS), which joined forces with the equally catchy API (Angkatan Pemuda Insaf). These were among the organisations that drew support from the peasantry and nascent intelligentsia rather than the aristocracy, so they were not exactly welcomed with tea and scones by the British.

AWAS was set up in 1946. She and API leader Ahmad Boestamam quickly became known for their fiery speeches throughout Malaya. They got married, even though he already had a wife. But that’s OK – the two women got along fine. A few months later, Boestamam was arrested on sedition charges because of a pro-Independence pamphlet where the words ‘Merdeka dengan darah’ (freedom through blood) were used.

It’s not surprising that the British invoked sedition charges to keep precocious natives down. After all, Malaya was a very lucrative segment of the Empire, and if the locals started thinking for themselves, who could tell what mischief they would get up to? (The corollary of this is that a truly independent nation would not invoke sedition charges so easily!)

The marriage did not last because of interference by his sister. Shamsiah was so upset that she fled from the house when Boestamam failed to defend her. This short-lived marriage was already her third; she does not have kind words about the first two husbands, who sounded like right cads.

AWAS was one of a clutch of leftist organizations that were banned in 1948 at the onset of the Emergency. The options for Shamsiah would be to continue her political life in more pliable associations or to keep resisting actively. She chose the difficult path of going into the jungle with the 10th Regiment, the Malay wing of the Communist Party of Malaya.

Life became even less comfortable. She frequently bungled in the jungle due to her lack of survival skills. She got lost several times and her accounts of these are rich with a very human bathos.

How on earth did this comely Malay woman, who studied in religious school, join up with the communists? The British and Malay establishment spread all kinds of nasty rumours about her. One that has persisted to this day is that she killed her newborn baby because the tyke couldn’t stop crying, and was thus a risk in the jungle hideout. She gives her own account of this incident, and although it absolves her, it will make you shudder.

She and her husband Ibrahim Mohamad were sent to China for further ideological training. But they were later fired by the Communist Party, assaulted and placed under house arrest. Their expulsion arose from squabbling within the CPM, partly as a result of wider clashes between the Chinese and the Soviets, but partly also due to internal frustration at the increasingly futile guerrilla struggle in independent Malaysia. Upon release, she earned her keep in China by working in a steel foundry.

This memoir isn’t as well-researched as, say, Chin Peng’s 527-page doorstopper My Side of History (2003). It is very patchy (especially in the second half) but its chatty, surprisingly good-natured humour shines through. Principled but not help captive by rigid party orthodoxies, she is not bitter about the choices she made.

Shamsiah and her family were allowed to return to Malaysia only in 1994. She is now 84 and not in the best of health; she couldn’t even attend the launch of this revised reprint. The last chapter consists of an interview she gave last year, where she is asked what she thinks of Malaysia. Her answer, where she advocates the abolishment of race-based, class-based and religious-based discrimination, shows that she’s still got it.