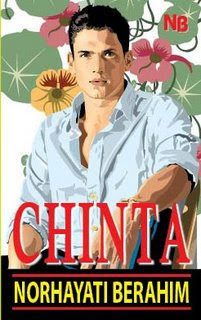 I was supposed to write about an urban anthology this week, but I got distracted by this big fat thing. Urbanity can wait; let us now share some lurve.

I realise I have been terribly remiss for not reviewing any Malay novels since this column started. So to make up for it, I promise I will read one every month. I chose Chinta because it was the best-selling Malay novel of January in the entire Popular book-chain. That’s a whole lot of lurve being shared.

Chinta is the name of the protagonist. She had a tough kampung childhood because her father was always mean to her. (We know she’s adopted, but she doesn’t until much later). She’s a total sweetie anyway, always willing to help anyone in need. She then works as a researcher at a KL food factory run by Raja Akid’s father. She has a fiancé, Saiful, who is getting bored with her. Raja Akid, meanwhile, is single and very dashing.

If you think you have it all figured out, the author has surprises in store for you. To be honest, I expected the bashful maiden to be all aflutter at the attentions of an eligible scion. But Akid has … a problem. They hit it off wonderfully as friends and are always trading wisecracks. But he admits that he probably can never be romantically involved with a woman.

There are subtle hints. He’s always well-dressed in designer togs; he even picks out handbags and shoes for her. He has a close male friend named John. Gasp! Is he gay? Chinta does entertain the thought, but then dismisses it. Would a gay man become the hero of a novel cinta?

Akid’s problem is that he can’t trust women. When he was a wee lad, he caught his mother doing the nasty with a man she wasn’t married to, and this scarred him for life. Even the mention of her would have him break out in a fit; Chinta, in a panic, thought he was epileptic. His opinion of his mother is expressed in English so enraged it becomes ungrammatical: “She is slut!”

We got it the first time, love! He's just not that into you. A rigorous editor could slash this book to half its length. But I think its sheer bulk is intentional: it mimics a comforting (and bulky?) friend who’s always chattering about the same things. Yes, that must be it.

This is the first novel cinta I’ve read and I’m glad it wasn’t so sappy. I didn’t feel like I’d just swallowed several cotton candies in a row. But Chinta herself is such a paragon – right down to her academic brilliance, cooking skills, and even muslimah swimwear – that she seems more like a wish-fulfilment fantasy for the target reader than a living, breathing thing. She even continues to pick up her ex-fiancé’s parents from work!

Akid’s sexual dysfunction and general childishness help to foreground her as the stronger character. Her step-mother and aunt, too, are shown as much more resourceful and resilient than the older male figures in the family. But patriarchy is confidently affirmed, since these good women never try to take the place of men!

I wonder if any other novel cinta has the couple’s marriage take place 150 pages before the end. The suspense, of course, now comes from whether Akid can finally bring himself to consummate it.

The eventual truth about Chinta’s birth parents brings joy and Dickensian fortune. All the good people end happily, and the three bad people end up murdered, in jail or diagnosed with cancer. If that doesn’t comfort you, I don’t know what will. Who needs sex when you have divine justice?

haven't read the novel but i noticed that a non-bald wentworth miller (the actor from 'Prison Break') is the Fabio on the cover.

if perez hilton's gossips are to be believed, isn't miller a 'kinsey = 6' type?

I was temporarily alarmed by how much the guy on the book-cover looks like Wentworth Miller. Gasp.

Burhan & Aish: I didn't even know who Wentworth was! Malunyer.

Hi mr Muhammad I would like to speak with you my mail is leorafat@gmail.com if you contact me i will write about a festival I am in charge of abot censored films

amir.. saw you on breakfast show. i like the way you explain about the biskut and the crucifix. i am surprised they even let you be on the show.

i know this got nothing to do with this entry but just wanna say i will pick up Politicans #2 when i have the money! recessionlah!

It's "gaptek" sweetie, and yes, you're welcome. :D

Sounds like a good book... might get hold of one if i see it in the bookstore.

just that the last time i read one of this writer's book, i got disappointed. I hope this time I don't.

But my use of Konukuniya is not acceptable, mwahaha!

wah. the cover was so much like the'pecah penjara' guy. Why? Takde muka lelaki Melayu yang hensem ke?

Btw, I saw another cover of a Malay novel imitating Judith McNaught(sila cari ejaan betul atas inisiatif sendiri, ya) a few days back. I hope it's not an 'established' trend.