When I was asked by Rotterdam's Gertjan Zuilhof to do a room in a 'Haunted House' exhibition, the first thing that came to mind was electricity.

In the rare instances where I have seen installations, what struck me most was how much electricity tends to get wasted. They have these video screens blaring away, often simultaneously, and sometimes accompanied by a separate sound system. This sense of waste gets exacerbated because art galleries, like our own Balai Seni, tend to be so empty. (The only crowded post-opening art space I've ever been to was when I showed Tokyo Magic Hour at the Yokohama Triennale a few years ago. That was like being in a superstore.)

And another thing that I wanted to do was give the visitors something to take back. As a souvenir. If an artist is gonna get paid, he might as well share the love.

Among my haunted house-mates, I already knew Garin Nugroho, Riri Riza and Lav Diaz, since we always meet at film festivals. This was my first time meeting Wisit and Vin Sohn. Just for the record, my favourite is Lav's, but you will have to find a description elsewhere :-)

Since I am now a book publisher, it seems apposite for me to get the reading room. But the fact that it contains several copies of only one slim book might make it like Borges's idea of Hell. The anti-bourgeois might also find the IKEA furniture particularly Hellish.
The Malaysian Book of the Undead was a book that I badgered the writer Danny Lim to come up with for a year. It's a very secular and skeptical book, as neither of us is the type to get spooked easily. And it thus fits the functional Scandinavian furniture very well.
The book's visual artist (who's a real artist, he is in art galleries and all that) was so embarrassed at being associated with such a book that he insisted on a pseudonym. But since he chose a Muslim pseudonym, I felt glad because I thought this would make the book sell better to the Malay-Muslim population, which make up most of Malaysia. And even Danny felt a bit embarrassed by such a blatantly cash-in book that he insisted on a 'compiled by' rather than a proper writing credit. (But both these fine young gentlemen were not so embarrassed that they didn't cash their cheques right away).
To find out the significance of the marbles, read the entry under Toyol.

I got Eclectic Design to do a new layout, and a red cover, for Danny's book and shipped 500 copies to Rotterdam by FedEx. Nice and cuddly publisher that I am, I even paid him royalties even though these books weren't for sale.
We (meaning the composer Hardesh Singh and a tall festival volunteer named Alp) went to a large IKEA outside of Rotterdam. What's scary is that, aside from the absence of a surau and the presence of alcoholic drinks in the cafe, the layout is exactly the same as the one in PJ. We bought the whitest furniture we could find.
The furniture was then assembled at the room. Luckily the 500 books filled the Billy shelves perfectly.
The marbles were very difficult to get. I went to four toy stores, which didn't stock them. (One said: "Come back in May. That's a summer item.") Finally Alp was resourceful enough to get them from a pet store. (Marbles are used for aquariums what.) 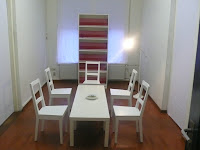 (The marbles are on the table)

There were 2,000 visitors in the space of 10 days. This is good considering the exhibition was only open at night! I hung around for an hour each day and it was nice to see people, after getting over their initial bafflement, sitting down and reading the book.
Visitors were encouraged to take back the books. My initial instruction was for this to happen only on the final day. But a Dutch newspaper printed that the books could be taken right away, so the 500 books started disappearing at a rate of about two dozen per day. It was indeed like the Toyol couldn't be distracted by the marbles anymore. So this is how it looked in its final hours, on closing day: 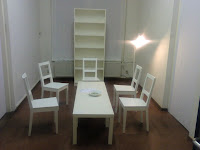 This installation ended up getting a better review than Susuk. Kwang kwang kwang!

(*photos by Gertjan Zuilhof)
Posted by Amir Muhammad at 09:06