Remembrance of things past 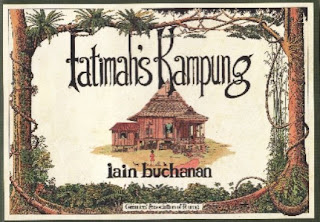 You don’t get many tots named Fatimah these days. If it’s true that celebrities inspire baby-names (which would explain why we are in the age of Siti), this dearth could be explained by the fact that the last celeb with a similar name was active over a decade ago. Even then, it’s telling that the stage-name she chose was Erma Fatima – minus the ‘h’, because Fatimah is so much more kampung than Fatima.

Telling, too, that even though most of our urbanites have been surrounded by concrete for only a generation or so, the very word kampung is already common slang for being gauche and unsophisticated.

Well, the protagonist of this beautiful book is kampung and very proud of it. It’s not just any kampung, mind you: Kampung Hidayah started over a century ago, and Fatimah’s great-grandfather roofed his house from ancient belian wood. He would tell his descendants: “Remember the tree that gave us the roof…Let us think of the tree and be humble.”

Although this is a work of fiction, it’s very much an act of remembrance. Kampung Hidayah represents all that we have forgotten about old villages, including the respect for nature implicit in their structures and rituals.

Iain Buchanan did not grow up in such a place, and you might say he’s a romantic. But romantics are better than cynics, and in reconstructing the collective memories of his wife and her extended family, he has crafted one of the most stunning local publications you will ever come across. The colour illustrations, many of them spanning across two pages, are full of wonders. You can see every leaf, hear every cicada, and even smell the “pleasingly mysterious” bunga tahi ayam: “not sweet, not fragrant, but musty, spicy, with a little bit of pepper, earth and smoke.”

Fatimah possesses great curiosity about her surroundings, and wonders whether she will ever meet the fabled tiger, which tradition dictates should never be referred to directly but as Pak Belang. In the meantime, her trip to a keramat shrine hints at the syncretic beliefs of the not-too-distant past.

Iain Buchanan first came here from England soon after Independence, and taught Geography for five years. Then, after two decades back in England, mired in “parochialism and corporate politics,” he found himself back here again with his Malay wife. Needless to say, much “had changed beyond recognition.” Back in his English university, he still lectured on the ecological and social costs of rapid urbanisation to an increasingly apathetic audience. He realised that story-telling was a much better way to get these points across, and spent eight years writing and illustrating Fatimah’s Kampung.

So this book is anchored in something sturdier than mere nostalgia. But it’s also far more sensuous than an environmentalist tract. The author perfectly balances his intellectual-activist impulses with his storytelling skills. As that famed lepidopterist-novelist Vladimir Nabokov once said, a writer must have “the passion of the scientist and the precision of the artist.” I am also pleasantly surprised that it’s published by the Consumers’ Association of Penang, whose previous titles never looked like this!

It’s a book I made myself read slowly, but even then, I am sure I will revisit it. Discreet proof of its structural intelligence can be found in the fact that the pages describing the house’s most important pillar, tiang seri ,occurs almost right in the middle, but slightly closer to the ‘rural’ half.

Ah yes, as you may have expected and feared: there is a ‘non-rural’ half. The village inevitably falls victim to rapid development. Even the keramat and the sultan could not help; rather, it’s the latter’s business interests that speeded the village’s demise. (Of course, this is a work of fiction, so Buchanan should be spared Thai-style lèse-majesté prosecution). I won’t spoil too much, but the house’s fate becomes a parody of crass commercialism. And the most heart-rending pages, at least to me, involve Fatimah’s eventual encounter with Pak Belang.

Although pricier (RM65) and wordier than Lat’s Kampung Boy, it deserves to sell like nobody’s business. It’s for children of all ages; rather, it’s for anyone who still has some of the spark, curiosity and even instinctive knack for indignation that children have. It’s finally not an anti-urbanisation screed but, as the last panel shows, it’s about how respect and healthy tradition must be maintained even when things are changing all around us.

But I myself never grew up in a kampung, so finishing this book made me also hungry to hear urban tales, too. But for that, you will have to wait till next week.